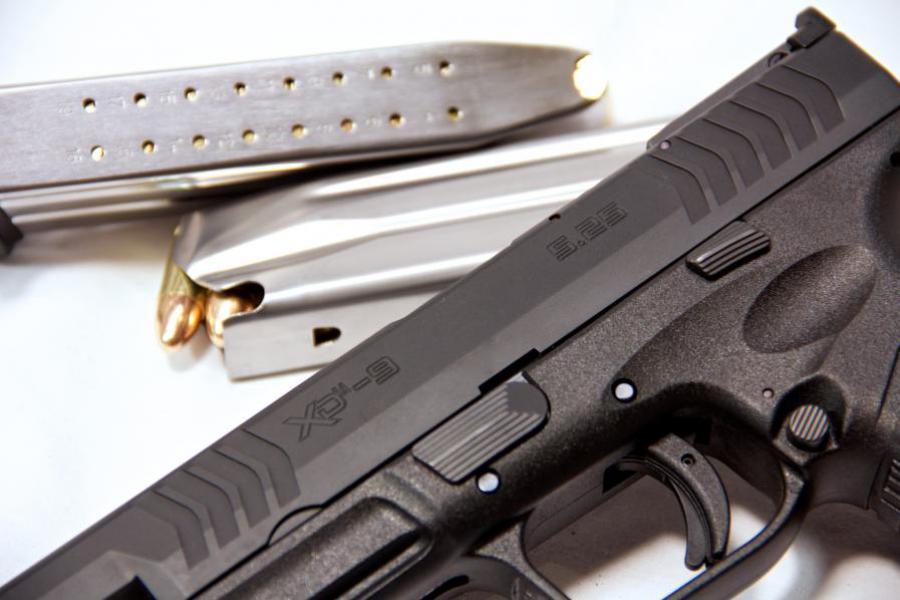 A competition gun will do nothing more than show you how ready or more importantly NOT ready for competition you really are. I felt I was fairly proficient with most service pistols with your standard 4”-4.5” sight picture and trigger. Decent grouping as a decent speed with prompt and rehearsed magazine changes. This pistol immediately showed me it was not just another pistol to review.

My mag changes had to be more precise and I couldn’t move at the same speed during reloads. It showed me I was sloppy. I couldn’t draw, acquire and set off 3-5 rounds in a decent grouping because I was shooting this pistol like every other 9mm and expected the recoil to behave the same as every other 9mm I ever shot. The expectations of a striker fired system versus what the XDM was offering immediately showed me my trigger control was not as precise as I thought it was. Now this all isn’t shame on the pistol it is a shame on me and I will explain.

This XDM 5.25 has a fantastic polymer frame. It feels harder than most polymer frames I have shot and is smoother and deeper textured in all the right places. There was no evident “pig-nosing” on the front of the frame after heated up with multiple sessions of sustained firing. (Pig Nose, is the front of the frame no longer maintaining a straight line from muzzle to grip. Has zero affect on the gun, just aesthetics.) The frame really helps to enforce a good high thumbs forward grip. The XD line has never been a favorite of mine due to the grip safety and angle, but this one shot better than any other XD I have fired.

The barrel is a 5.25” Match grade barrel chambered in 9mm. The longer barrel and slide allow for a longer site picture and increased accuracy. The barrel in particular gives you just that bit extra for both velocity and rifling to send the round out in a nice, tight spiral. I was actually able to shoot a silhouette steel plate at 100m for the first time in my life using this pistol and I have never been able to do it before. Was it the pistol? No, it was thousands upon thousands of rounds and practice…but it definitely helped as I have yet to do it with any other pistol I own.

One other awesome component that helped was the actual sights themselves. They use an adjustable rear sight with windage and elevation. The ridged and all black rear is different than most full size pistols and really helped to highlight the front post fiber optic. The XDM comes with plenty of spares for the fiber optic too for both red and green. Different lighting conditions as well as protective eyewear will al interact differently with the different colors so it’s pretty cool that it came with both colors.

The trigger and controls are both very tight compared to most striker fired pistols as well as ergonomic. The trigger has a pretty short take up and by comparison a very definitive break. A majority of striker fired pistols I have have shot have either a gritty or spongy break to them. This one felt a lot closer to a hammer fired pistol than I expected. The controls are solid and placed in easy to reach places. The mag release and the slide release are almost in line with each other and very pronounced without running the risk of accidentally releasing a magazine in the dirt or keeping the slide lock down with a thumb forward grip. The release is really in the sweet spot as well and very easy to get on without having to cant the pistol too much.

The machined slide is tight fitting with no play. Despite not having full length rails on the frame it glides with ease with no slop to be found. There is a good chunk machined out of the top of the slide as well to take away some of the weight of the increased amount of steel that would undoubtedly affect the balance and recoil on a slide that big. Believe it or not, it’s not there just to look cool. The slide also sports nice and deep serrations on the rear and forward of the ejection port. The are deep and sharp but not so much as to worry about injuring yourself. They are great with and without gloves and the front serrations really aid in manipulating the firearm both for safety and speed (demonstrated in the video review.) Melonite coated and cleans up easy.

Overall I would recommend this pistol to anyone looking for a competition pistol without having to start at prices involving a comma. For around $650 this is a fantastic piece to go to competition with right out of the box with a vast amount of aftermarket modifications so you can improve the pistol further with your needs and style. I wouldn’t recommend for a first pistol or a carry pistol but hey, to each their own. I enjoyed what this pistol taught me and really enjoyed shooting it.