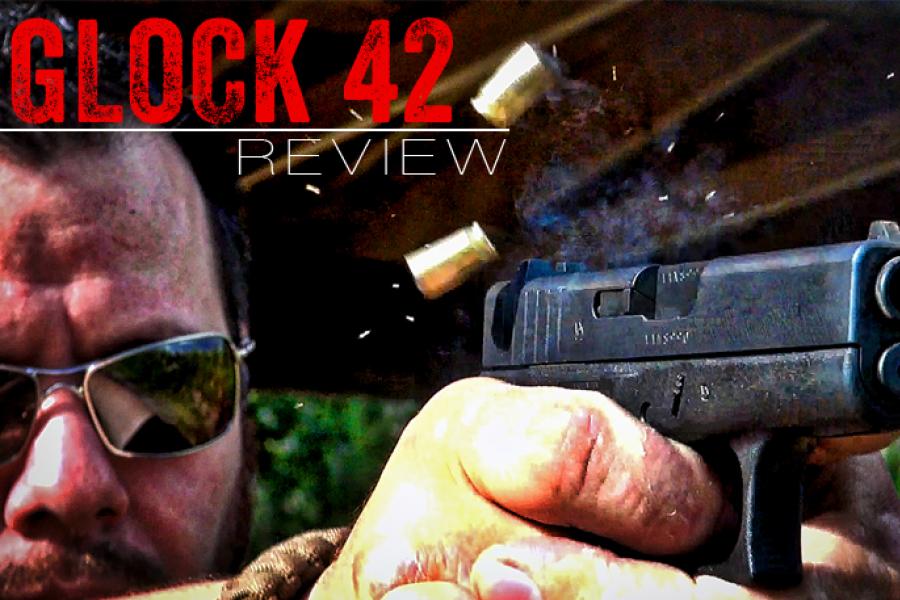 What a lot of people do not know is that in between 2012-2014, one of the biggest Conceal Carry market demographics on the rise was women. With that many companies began pushing forward on their ultra conceal carry models. So what separates the GLOCK 42 from it’s competitors, and furthermore why was there so much fuss about it? To start, no one expected GLOCK to unleash a .380. The GLOCK 42 is a single stack handgun chambered in .380. It appears, takes down and shoots just like all of it’s big brothers and sisters. The main differences are mainly size, capacity and notably the trigger. It is the Tyrion Lannister of the GLOCK family.

In a world of 9mm, .40 and .45 single stack conceal carry fan favorites, why the seemingly “neutered” round? For those that don’t know, the .380 is essentially a 9mm short. Same diameter as a 9mm, but a smaller cartridge (less powder, less velocity, etc.) So now, despite what all the internets and the guy behind the counter say, why do people shine the .380 in a bad light? Let’s map it out.

The .380 is a cool round in my eyes because it has a lot of pros and cons that really highlight it’s intended purpose. A point and counterpoint can be made for just about every feature of the .380 which may limit it’s end-user market, but also excels at that niche. Reduced felt recoil and muzzle flip for example lets you stay on target and not “fight” a gun back onto it’s sights. The counter to that though is a weak extraction of spent brass as you can see in the video review as rounds seemingly dribble out of the chamber upon being fired. The shorter round also lacks velocity which will reduce hydrostatic shock in a defensive scenario as well as leave/create a smaller exit wound. The flip side to that is less over-penetration and coupled with modern hollow point rounds, negligible internal damage differences counter balance that as well. The round’s overall length is also shorter than a 9mm which helps in smaller magazines, smaller grips, smaller pistols and a smaller print of the gun on a person offering more conceal-ability.

What does size have to do with anything? Many will want the most gun they can get in a fight for their life and that is an understandable and valid desire. At 5’11” and 265 lbs., the .380 is not the most gun I can conceal. But what about some of the more, let’s just say “leaner” people? Or those that have minimal clothing, or even many of the fairer sex. What about limiting garments or apparel not designed for concealing? Are there 9mm options out there that are comparable in size? Yes there are, but they are comparable, and not the best fit for that individual. So while we can measure our manhood by caliber all day long, that doesn’t mean one caliber or one pistol is great for everyone.

The GLOCK 42 nails that demographic down with it’s simplicity, ruggedness and straight, soft shooting capability. The size is an asset with the 42 as it is noticeably smaller than many other in the same category and makes for a very easy appendix carry, or the many other places you can find to conceal it. Whether wearing a business suit in your corporate environment, out with the kids and family, or even going for a jog in less clothing to conceal, the size matters a lot. I used to carry “against company policy” for the longest time simply because my job wasn’t worth my life. If I had the GLOCK 42 back then, this would have been my pistol of choice hands down. Very easy to grip, fast follow up shots and a super simple interface we have come to know and expect from GLOCK.

In our review we put about 350 rounds through the GLOCK of horrible ammo and decent ammo as well as varying hollow points. In the first 50 rounds we had the same issues we have encountered with most brand new pistols. Stove pipes, failure to eject (FTE) and the incredibly popular “last round” insertion in the magazine. Once the gun was past that 50 round mark, all issues were gone. Loading all 6 rounds in the magazine with no problem, no feed issues and proper cycling. Even when we threw, kicked and buried the pistol in a mixture of sand/clay and dirt, the weapon still cycled. Interesting enough, when we threw it in a puddle to swish it around and clean it off, we began having issues. This doesn’t mean it can’t get wet as we did leave it outside for a bit in a rainstorm prior to the video review. It seemed to create some sort of sand/silt sludge paste which created enough resistance to impede the cycling of the tiny .380. A tap, rack, bang yielded single shot results and a functioning firearm but it was still interesting to see how far we could push a little .380 to failure.

This was the first review we have ever had of a .380 pistol and it was an eye opening experience. I trust the .380 cartridge more than I did before and it was really surprising to feel the difference between the .380 and the larger rounds. Enough of a difference where I am now seeking a pistol that shoots as smooth as a .380 but chambered in 9mm or larger. The potency of the round and the felt recoil were nothing short of eye opening and I am happy GLOCK gave us the opportunity to try it out. I feel like The Gunny did not lie to me and it was a smooth pistol to carry and a lot of fun to shoot. The size is definitely appealing to me and I am sure many more. Comparing it to “similar models” isn’t ergonomically the same and you know it the moment you pick it up. Another notable point is the trigger. I don’t know if it is because there is less on the trigger bar due to size, a better or more polished sear and components or what, but the trigger on the GLOCK 42 is by far the best factory trigger I have ever felt on a GLOCK. Period. As a conceal carry piece, the trigger is hefty, but it has a solid stop when you hit that wall and break the trigger as opposed to the usual striker fire mush. It also has a very positive and audible “click” when it resets and almost zero take-up for follow up.

In closing, is the GLOCK 42 a do-it-all pistol? No. I would not expect to shoot 100-200 rounds from this pistol at the range for ha-ha’s or even get a custom outside the waistband kydex holster for it. Could I? Absolutely. It is not made to be, nor should it be in the same category as a full size service pistol or even their slightly smaller counterparts, like the GLOCK 17, 19 and 26. Is the GLOCK 42 a highly concealable, effective personal defense pistol that I can wear and hide just about anywhere on me? Yes, in spades. You can wear 6 of them and not print as much as one GLOCK 19. For the market and purpose this pistol seems to have been designed for, I truly enjoyed the 42 and have no worries about the .380 as a caliber choice. People can talk a good game about caliber all they want but as most have put it out there already, no one is lining up fearlessly to take a hit or six from that round either.