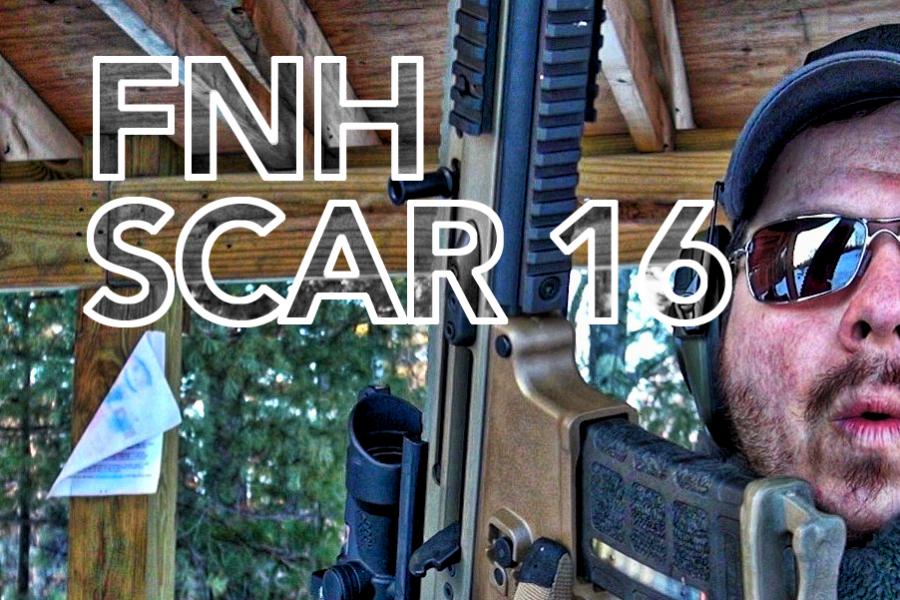 From the way it disassembles to the way it operates, the FNH SCAR is in my opinion, designed and built off of a SOCOM wish list of wants and needs. Designed with the original intention of replacing the M4, the SCAR takes away the customization value of the Armalite design as a trade off for uniformity without sacrificing current accessory mounting options and common needs and wants.

The model we reviewed was the SCAR 16, which is the “light” version chambered in 5.56x45mm (.223) with a monolithic upper and rail. The entire system is aluminum with the exception of the lower and the butt stock being polymer. Despite the non-removable rail system, the custom crowd will still find solace in the fact that there are companies like PWS and MI that make extensions and accessories to add more rail space to the SCAR. The SCAR is not UN-customize-able, just simply includes many features that are as or more solid than aftermarket.

What you lose in customization from the AR platform you are used to, you gain in built in features and flexibility without making (sometimes costly) modifications. The SCAR has a cornucopia of features to really get this rifle to configured to you, the shooter more than many other rifles. From the collapsible butt stock, which also is a side folder to the adjustable comb and adjustable gas to the amount of engineering in the Ugg boot look alike stock is impressive. The built in iron sights are also of very high quality, feeling solid and utilizing very easy to read and adjust windage and elevation controls. Adjustable gas for all you suppressor fans out there is a simple 2-position lever on the piston system allowing for quick adjustment.  The piston system runs very clean, does not gum up and is also easily serviceable.

While ambidextrous controls are always a plus for most, I usually am not a fan. The SCAR however was fully operable left or right handed without the ambi features being cumbersome or in the way. The mag release for example is slightly recessed and shielded from the top and bottom on both sides keeping it in-line with the receiver really well without impeding the ability to find the release button. The reciprocating charging handle is also swappable from left to right which I found was more convenient for my thumb and wrist livelihood as opposed to being left handed or right handed. I am a little surprised that for something so clearly engineered and thought out, still used an A2 style grip and not something more modern or ergonomic to go with the platform. I found the grip and the ambidextrous selector to actually be a bit cumbersome and awkward when comparing it to the AR Platform.

The SCAR also sits a lot “taller” than what most are used to as well.  Dimensionally it is not a drastic variance from what most are used to, but it feels and sits in your shoulder a lot thinner and higher. Maybe it’s just aesthetics, but shooting the SCAR is definitively a little bit of a different experience than firing the rifle we are all used to. Now, that’s not a bad thing just something I was not expecting. This rifle also felt like it was always intended for the 7.62 NATO platform, also known as the SCAR Heavy. It felt a little like driving a 4 cylinder Jeep compared to a 6 cylinder. Both are very capable and rugged, but once you feel the power and muscle of one versus the other there is not much debate after that. Now, with that said understand that 5.56 is far more common, is lighter and widely available, so in reality this model makes a lot of sense not just for availability but also for business. If you had never fired a SCAR Heavy, you would never even know.

Field stripping the SCAR is also really simple. In all actuality it is close to the simplicity of the AR platform with a few key differences. You can remove more parts without tools, and smaller parts on the AR platform are bigger and/or chunkier on the SCAR enabling full disassembly with gloves on or in the wet, cold or muddy environments. I know this because it was 5 degrees when the sun was up for most of the video shooting and I didn’t need any special tools or even extra props (read: multi-tool or bullets) to fully break the rifle down all the way down to bolt and firing pin. Really great engineering with simplicity and the field in mind.

Overall I truly feel that the SCAR is a cool platform. It was a good, consistent rifle with a lot of features I really liked at my disposal. I think the 5.56 versus the 7.62 is a distinctive difference was definitely noticeable in the overall operation by the shooter. It is unfair of me to compare the weapon tested to it’s bigger brother or even to the AR platform, but if you have never owned or fired any of the SCAR series then it helps aid a familiar point of reference. It is not a bad rifle in any sense of the word, in fact it is quite the opposite. Easy to clean, fully adjustable, suppressor friendly,  and just downright cool looking, but the selector and the grip were not for me. I am torn on the charging handle simply because again, it is NOT and AR and the manual of arms is different. I like the reciprocating handle, just not on my support side. It is actually pretty cool to feel like FNH made a rifle that operates like an AR and AK had a baby that was not a complete mutt, but in fact born into royalty.

In closing, the FNH SCAR 16 is a versatile and cool rifle. If you can swing the price tag, it is definitely a keeper. It operates and feels like it was a purpose built weapon and has very intuitive controls and features. Even though it isn’t as common as the AR platform, it is in the same ranks as the P90 for me. It’s really cool and would love to own one. It is like a German automobile, it is engineered and smooth operating and is definitively not a Chevy. If you ever get the chance I would say go shoot it and see if it isn’t fahrvergnügen.