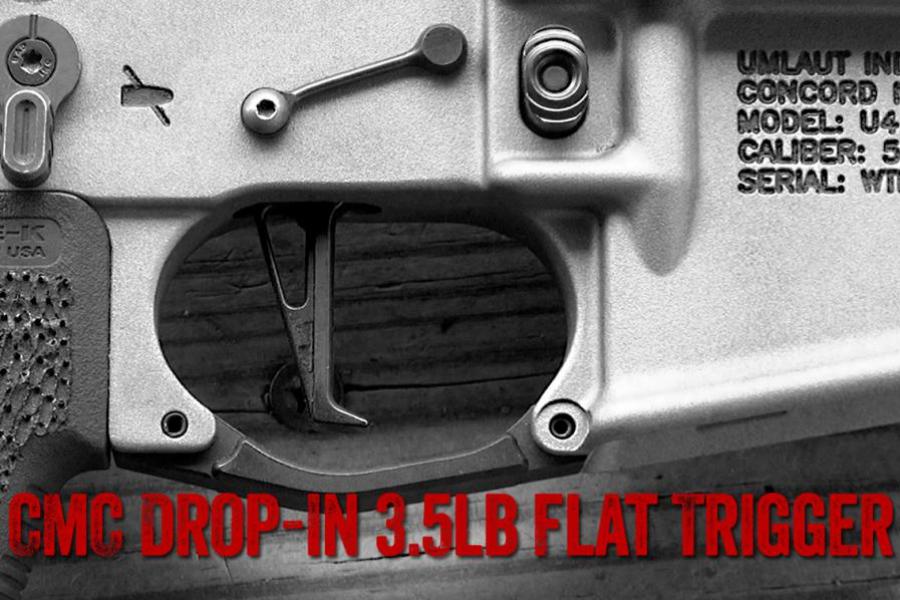 In minutes you can improve your accuracy, your speed especially on follow up shots, and the durability of your fire control. It literally, as the name states, drops in. The CMC trigger is engineered to fit almost exactly in the spot it is supposed to sit with minute fidgeting necessary to line the pins up and set the trigger in place. As for pins, the CMC drop in we tested came with pins for you as well as some very small and unnoticeable once installed C-Clips to help make sure they do not “Walk” themselves out. This is prone to happening sometimes under high rates of fire. I personally use KNS anti-walk pins to make sure everything stays put, not because I am some hot rod, but for reviews alone we put a lot of rounds downrange. I am told there are some new super secret awesome pins coming out from CMC soon, and we can’t wait to see them.

Now before you get all “Mil-Spec” on me or try and tell me GI is harder, better or good enough for you, then why have you changed any other parts on your rifle? And if you haven’t changed any at all well then… ok, Mil-Spec is perfect for you! But for those that upgrade or replace or modify every other part on your rifle you need not be scared, this is the best and easiest trigger upgrade you can get.

Now for a brief history on CMC Triggers, and only because I have heard many stories about their builds, who owns them and misconceptions about the brand. CMC started a long time ago, or “ages ago” as the owners put it as a collaborative effort between Chip McCormick and Jack Biegel. Jack was busy Engineering and Manufacturing replacement Spare parts for Jet Aircraft, Nuclear Submarines, Aircraft Carriers, fire Arms and most ground support equipment and, to put it plainly without trying to understate it, was the engineer responsible for the significant reverse engineering and original design changes necessary to aid Chip McCormick with this trigger design. A Drop-In Trigger, easy and fast upgradability of your fire control without filing parts, replacing springs or paying for all of it from a gunsmith. Eventually it was handed off to Chip. Jack went back to making things for our men and women in the armed forces. In 2010, Jack & Debbie start their own machine shop. Having stayed in communication over the years with Chip, manufacture of the latest, BEST Drop-In Trigger begins again. A short time goes by, and because Chip’s Magazine business is doing so well, he decides to sell the Trigger business to Jack and Debbie. Short story endless, the product succeeds again. Eventually, the Patent for the Drop-InTrigger originally awarded to Chip McCormick are sold to O.F. Mossberg and Sons. Jack & Debbie purchased the Patent for the Flat Trigger directly from Chip McCormick.

So basically, unless you have one of the first runs of a CMC trigger made before 2006, and after 2010, you are not using a product that was 100% engineered, backed, and supported by the inventor and creator of the CMC drop-in trigger. Since the family run business has been brought back to one family, CMC has been on the rise quickly and they are expanding their line more and more every day. The Drop-In system is becoming such a value added upgrade that more and more companies are trying to take a stab at it. After using a CMC trigger I can see why.

In closing, CMC builds a really good trigger not just for the ease of installation, but mainly because it is simply, a good trigger. This is actually the part most who read will want to read about. The CMC 3.5lb Flat Trigger does a fantastic job at having a nice snap to it at the end of a very short take up or “creep”. In layman’s terms, the point from which your finger touches the trigger to where it sends a bullet downrange is very short and tight. The reset is clean with minuscule take up and the 3.5lb pull combines all this together to have a very fast and effective fire control system. I will be running this trigger for quite some time and enjoy the immediate benefits I have seen by taking the leap and installing something beyond General Issue.