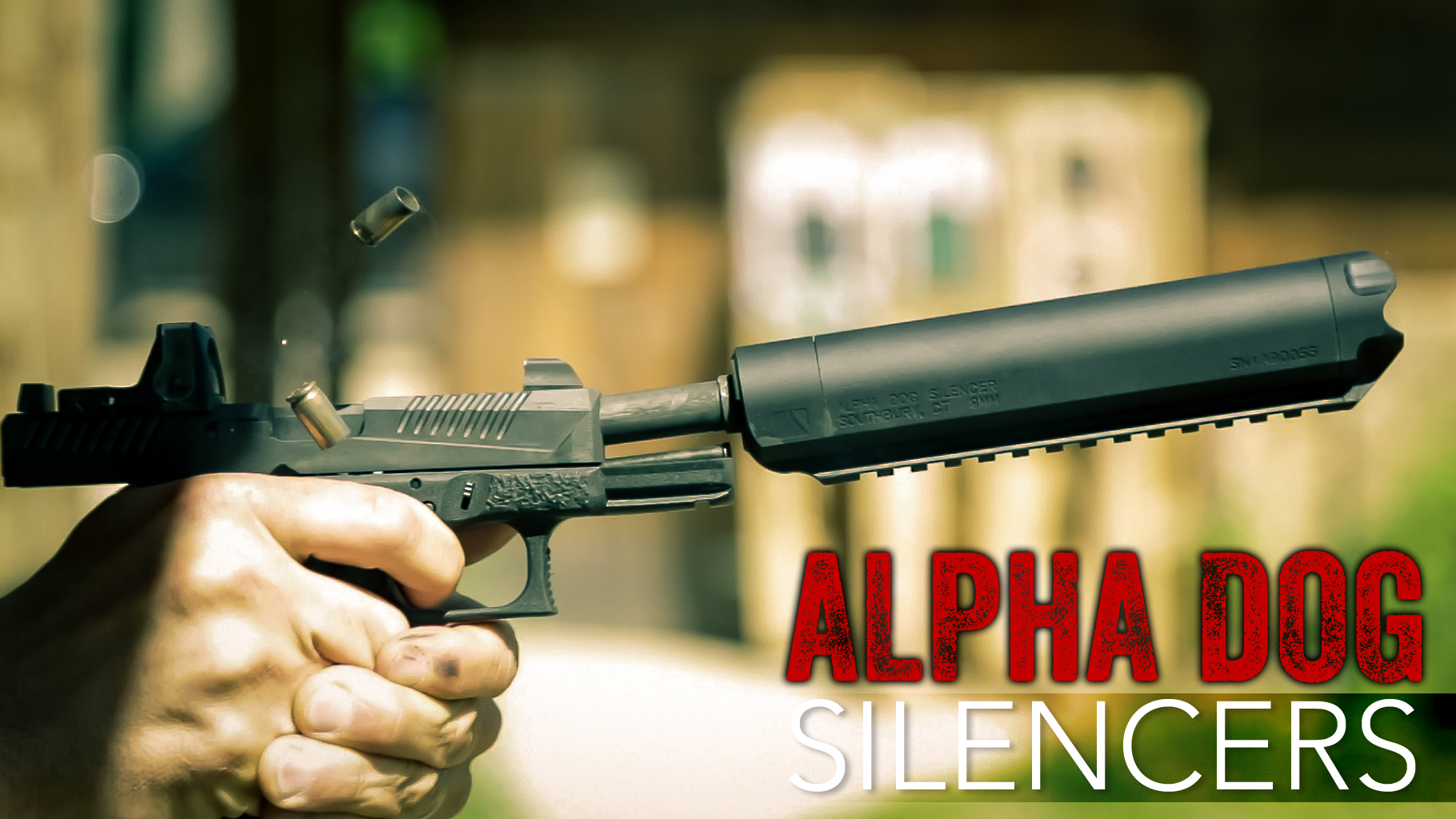 While visiting family for the thanksgiving holiday down in CT, a buddy of ours from Rand and Dewey Rods invited me to come check out a facility known as King 33. Short story endless, one of the people “just hanging out” at King 33 during that visit on Black Friday was Aaron, the owner and inventor behind Alpha Dog Silencers. No velcro, no camo, and quite literally looking like nothing we have been accustomed to seeing in the firearms industry with a waxed and twisted handlebar mustache, Aaron asked if I would like to try his suppressors. To which there was already a station with pistols and ammo already waiting, I felt a little… “set up” and on the spot. So off we go shooting a suppressor with picatinny rail on it, and I have to say… I was immediately flipped 180 on my opinion of it.

Now I must say, I am not all starry eyed for all the things you can mount to picatinny rail, especially on a suppressor. It seems weird to me and a little excessive. Some guys have have many uses and ideas for it, and some of them actually sound reasonable or smart to me, given those people and there purposes for those applications. For someone like me, I have no desire to mount anything, nor (importantly) the need to mount anything on my suppressor. I know TruGlo makes a really neat mini laser that makes sense to me to have on there, but not for everyday use. More like a suppressed “bump in the night” type setup. But I digress. What does make sense to me is heat dissipation. Anyone who has ever put a magazine through a suppressor and instantly tried to either take it off, put it away, or put it on another pistol will tell you, you get burned. Plain and simple, suppressors get hot, just like the muffler of your car. There is combustion and expanding gasses and heat galore, of course there is going to be heat. The picatinny rail does a fantastic job of doubling as it’s intended purpose, heat sinks.

Heat sinks allow more surface area of a metal part that conducts heat to cool down and dissipate heat faster. Like your radiator, PC gaming video cards, parts in your laptop. It is a tried and true method of helping keep temperatures down with metal that continuously gets excessively hot. Now that we all have a degree in thermodynamics, lets continue with the suppressor.

The Alpha Dog Silencer is a Monolithic baffle design meaning the baffles of the suppressor are not stacked cups but instead is a single piece of metal that has the baffles cut out in the desired pattern to help slow gasses and sound. The Alpha Dog also has a break free cap on the end as part of the user serviceable design, not for cleaning but as a safety precaution. We will get to that in a second. The Nielsen Device, Piston, Booster, whatever you want to call it is held in place on the opposite end with a simple mechanical thread which locks down the opposite side of the Aluminum “tube” that houses all the guts. The can is also mechanically timed (meaning you compress the piston spring by pulling the suppressor away from the pistol and rotate to desired “timing” location before releasing the spring tension. Also a favorable or desirable trait.

The baffles are coated with (unit tested) a cerakoted finish which adds a color differentiation and some added toughness to the metal. They are also in a pattern I would describe as an ascending delta. Simple triangular baffles that become closer together as they get closer to the muzzle. Simple, clean and effective. When cleaning, the cerakoting helps let you know where the heavy build-ups are.

The Nielsen Device is simple to remove, simple to put back together and the Alpha Dog comes with the tool needed to remove it, made of hard steel. Mostly can be done by hand, but also works with a wrench or socket if you really want to muscle it on or off. Also not an expensive replacement if you for some reason lose it.

The tube itself, is more than just a simple design, it’s almost sneaky. Remember those picatinny rails, they are actually hollow on the inside. Why does that matter? Well, the more internal volume you have, the more room for expansion and sound suppression you get. While it may seem like not a lot of area by comparison to the rest of the tube, you have to take into account every little bit helps and thats why you see so many other brands changing the shape of the tube or even going back to some old school designs to help increase that expansion space.

We tested the Alpha Dog Silencer in 9mm, and a majority of the time utilized the in-house Alpha Dog medium, affectionately named “Dog Slobber.” I am happy to report that despite most of our shooting utilizing the medium, the can running dry was STILL more impressive than some of the other “more well known” brands 9mm cans run equally as dry. Truth be told we ran the suppressor mostly with the medium for two reasons. One, it sounds super cool and pleasing to the ears. Truly a “pew pew pew” sound and continuously had onlookers at the range saying “WHAT?!?!” with jaws dropped. Running the can dry it was not as much of a show stopper because… it worked. It sounds like a suppressed 9mm, plain and simple. Does a great job at reducing the “crack” of supersonic rounds and as we found over time (dependent on relative humidity) actually made it as quite as subsonic rounds. Impressive. The second reason is that it is a user serviceable silencer. By adding medium we are also increasing pressures a little more but also pushing material out through any gaps in the suppressor from dismantle-able parts.

With the medium involved more than not and constant assembly and reassembly of the suppressor, we did notice some leakage. Nothing substantial or cause for concern. There were no blowouts, no massive amounts of gas or liquid escaping, only microscopic. After a few hundred rounds and mag after mag of shooting “wet” we would begin noticing something resembling sweat marks at the seams. This is natural and unfortunately unavoidable due to heat, pressure and sustained shooting (see thermodynamics above). We noticed nothing coming loose or leaking to the naked eye and all the expulsion we could see came from the muzzle. Just a little cleaning with some of your normal favorite cap or lube and you’re good to go.

Speaking of the muzzle, we had talked about the front being mounted directly to the baffles. This was actually proven at a recent machine gun shoot we were at where a round left the barrel, went rogue inside the can and had (multiple) baffle strikes. Thanks to the design of the Alpha Dog, built to all blow forward and down the shroud it did exactly that. All debris and flack from the suppressor went downrange, not harming the weapon, the shooter or anyone on either side of the firing line. Now while I am not going to destroy a perfectly good suppressor to see if it’s true… this was a perfect example of it working the way it should.

A quick note on mechanical timing versus a pressure or ratchet locking system, some companies do ratcheting or pressure tightening very well, others not so much. I can’t tell you how frustrating it is to have an expensive suppressor coming out of timing because of a latch or “gear” or whatever becoming worn down from re-timing. I like mechanical, especially on pistol suppressors simply because it’s simple, straightforward and generally uses less parts in my experience.

Overall, the Alpha Dog Silencer is more than just tactical shenanigans gone too far. It is a better than average suppressor at a lower than average price point. $690 plus a tax stamp it is still sub $1K, has a great warranty, simple to operate and clean and does way better than some of it’s higher priced competition. Mount stuff on it, don’t mount stuff on it is your call, preference or need. At the end of the day you are buying a solid suppressor, not more pic rail. Truly can’t wait to see what Aaron the mad scientist comes up with next with Alpha Dog. Good Product, Good Company, Good People and a Good Price point.