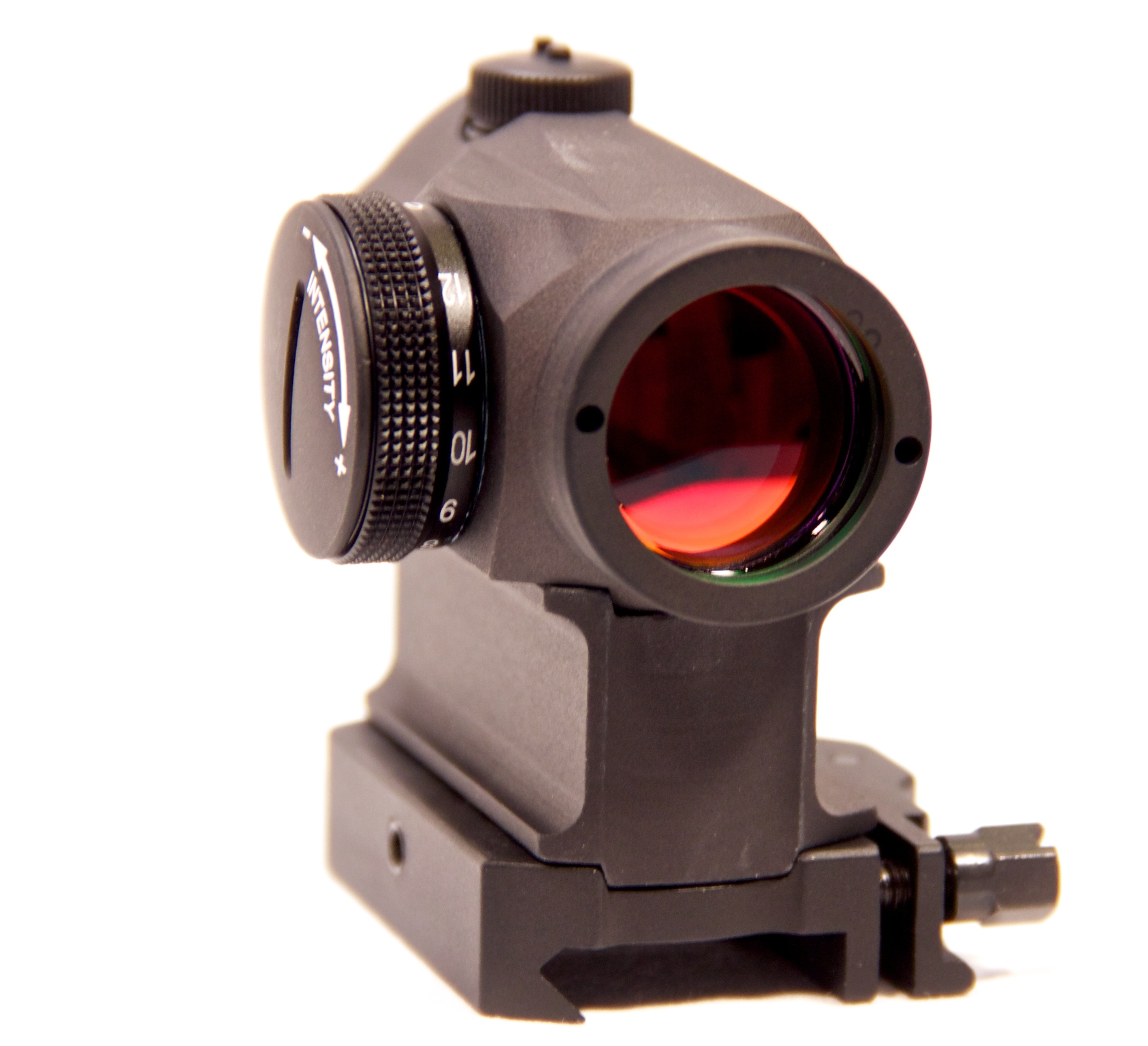 The Aimpoint T-1 Micro, you have seen it on rifles everywhere. You have seen it on the rifles of both high and low profile trainers and in videos. You have lusted over it and ogled it and maybe even said the words “someday.” I am here to tell you, believe the hype.

Aimpoint is very well known for rugged, sealed reflex optics that take a beating and hold true. They achieve great lengths of battery life off a single battery and generally have a slick aesthetic appeal as well. Most of Aimpoint’s product line look the part, like sawed down 40mm optics with some knobs on them, or a battery compartment with a plethora of good looking mounts to emphasize the “all business” look about them. the T-1 is a slight departure from the rest of the product line in appearance but definitely does not skimp on the build quality or usability.

The T-1 is a slippery looking trimmed little brother to the Comp M4 in many ways. I would say if the Comp M4 is a champion body-builder, then the T-1 Micro is the Cross Fit counterpart. Leaner, lighter and rugged with easier controls and a nice tight 2 MOA dot. The windage and elevation are well engineered and thought out, the controls for power and brightness are easy to read and adjust and overall a really great optic. Let’s get into some of those in more detail.

The body is made of hard anodized extruded high strength aluminum. Big fancy way of saying very hard and very light. It is sealed and can go down to 80ft. of water and has the -50ºf to 160ºf temp range like many other Aimpoint optics. Draped in non-reflective matte black with the subtle Aimpoint logo and shaped like you pulled a square peg over a round hole and stretched. Very sexy little optic. Beautifully contrasts the multi-coated ruby and emerald colored lens which does a fantastic job of eliminating any interference from outside light sources.

The LED red dot has 4 night vision settings and 8 brightness settings which go from barely visible all the way up to Rudolph in your face bright. We received the 2 MOA model but the T-1 is also available in 4 MOA as well. I found that for longer shots (100-200m+) as well as low light and shooting in the dark worked really well on the lower brightness settings. When the sun was on me in full force or maybe we were working on multiple targets or moving and shooting, I found the higher settings to lead to faster acquisition and be highly effective. The dot stays illuminated for over 5 years on one (2032)calculator battery.

The brightness dial is the big win in my book though. With or without gloves on this was fast and easy to adjust. Far easier to adjust the optic brightness than hitting buttons repeatedly. It also has muted but positive feeling clicks with clear markings so you know exactly how far you are turning the stippled knob end. I really liked the placement of the big dial as well by comparison to the other optics we have used as well and was very easy and second nature in adjusting. This dial also doubles as the housing for the CR2032 battery compartment which is a very efficient use of the compact size.

The Windage and Elevation adjustment also impressed me with the engineering and tool less ability to use it. Every T-1 ships with an adjustment tool in the box, but it is just an added bonus to the optic. The dirt covers for the T-1 also double as the adjusters for the windage and elevation so you can unscrew the cap, place it on the adjuster and quickly zero it in.

The 39mm Larue QD riser and mount we used is literally at the perfect heght for a co-witness, Goes on very easy and says on with a quick disconect lever that uses a “locking lever that is easy to adjust and lock down. If it wasn’t for that mount it would not have been as easy as it was to test the AImpoint T-1’s durabilty and ability to hold zero with drags and drops (or tossing down rage.) Taking the optic on and off repeatedly there was never a moment where the zero failed to hold.

Overall, I may seem like I am gushing over this optic but at the end of the day, I stand by my words. Believe the hype. All the ruggedness of Aimpoint with water proof, durability, ease of use and 1/3 the weight of the Comp M4 is a really hard thing to find a gripe over. When you hold this in your hand or look through it down the muzzle of your weapon you instantly know and can feel the difference between this optic and some of the clones out there. The T-1 Micro is a fantastic sight and has been fantastic to work with.