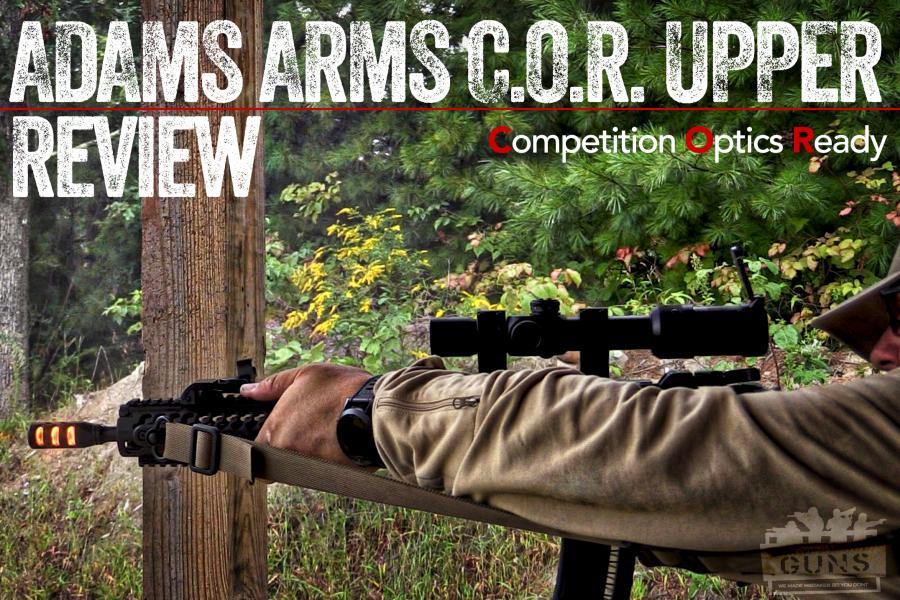 The myriad of components this build boasts all are really amazing in their own individual rights. When you put them all together it creates a really low impulse soft shooter that when matched with a good trigger can throw lead quickly and accurately.

Since C.O.R. is an acronym for Competition Optics Ready, we of course had to get some really good glass on top and we were lucky to have received a SR-8s 1-8x optic from U.S. Optics. We partnered it up with an American Defense Manufacturing USO Offset QD mount and we could not be happier with the end result. It’s like they were made for each other. The crazy thing is that aside from a 2-point sling, that was all we needed. This Upper was ready to rock and roll just as soon as we got it zeroed. That’s all it takes with this upper and we do love our conveniences. For a sling we used a Magpul Dynamics MS/1 with their new MS Slider which is a great sling, but that is for another time.

So many parts come together to create this upper and prove that is a sum of the parts and not the individual that make a build be as good as it can be. I will address them individually and hopefully explain as best I can how each part matters. Let’s start with the core of it all, the barrel.

The Adams Arms C.O.R. Upper boasts a 16.5” VooDoo Innovations LifeCoat barrel with a rifle length piston system. The LifeCoat provides excellent corrosion resistance and abrasion resistance even more so. 16.5” of 1:7 twist mean the heavier weights have no issue at all being all they can be. The rifle length gas system which travels through the 3 position piston system literally pulls just enough gas off to cycle the bolt when fully opened. This is another factor in cutting down on the impulse of the weapon.

The three position gas block has a setting for wide open, which works with everything we tested although we did only test .22, 5.56 and 5.56 green tip. It has a reduced gas setting which is intended for suppressors. This will bleed some of the gas off so as not to over gas the rifle when you encounter the pressure increase suppressors can create. It also has a third position for single shot only… although aside from a needed issue to cycle a semi-auto weapon after each round… it escapes this reviewer. Next on this barrel is the 3 chamber VDI JetComp which is a meaty brake. Three chambers that reduce in size as you get closer to the muzzle with 2 vertical ports that all work together harmoniously to keep any and all leftover gas pushing left, right and up. This keeps the rearward traveling weight and muzzle climb at almost zero. So even magnified in at 8 power there is minimal bounce to get faster follow up shots without needing a super aggressive hold on the rifle. Last but not least is the VooDoo Innovations LifeCoat Low Mass Carrier. This BCG has a LOT of meat taken out of it and with the LifeCoat she is light and slippery. This is the final piece to the impulse/felt recoil puzzle as there is a significant amount of reduced weight sliding back and forth in the buffer tube. It is married very well with the gas system and as far as we can tell we never even came close to bottoming out the buffer. This upper cycles fast and smooth.

Most people cannot talk about piston systems without bringing up 2 primary arguments. Where fouling and carbon go or get built up and which is better is one. The other is Carrier Tilt. Fouling happens, I don’t care what lube you run, what coating your parts have or what shaman blessed it to be self cleaning. It happens, and from my experiences so far, the Piston is by far easiest to clean, but sometimes needs to be cleaned more frequently for proper cycling as opposed to a DI (Direct Impingement) system which has much more room for fouling to live and can go longer periods without cleaning but is a pain to thoroughly clean. Again, this is my experience and opinion, results may vary. The other argument is the action created by a piston striking a carrier and creating something called “carrier tilt” which can wear on your buffer, buffer tube and receiver. Let me explain.

DI rifles have the power of gas coming into the receiver and propelling the BCG rearward into the buffer and back into the buffer tube. Fluid like a water rocket. The moment you change that to a system reliant on impact, there has to be an equal and opposite reaction (ref:Newton). So what tends to happen in Piston BCG’s is the carrier itself will tilt and push the rear of the BCG down, to grind along the bottom of the receiver extension tube and also damage the buffer. The VooDoo Low mass carrier addresses this with not just the slick coating but also with an sloped rear to the carrier in addition to the widened groove for the buffer retaining pin. As you can see in the video after several hundred rounds, there is zero wear on the buffer or receiver.

The rifle comes wrapped up in a Samson EVO rail made specifically for the piston system and is a 15” free float with tapped holes for adding components and modularity when needed. The Samson Grip stop is a really convenient and handy stop as well as having a knurled back end for pinning against barricades and such for extra support. There is a QD mount as well as a couple other picatinny mounts that are included as well. Truly optics ready, the C.O.R. Upper Receiver comes with Diamondhead USA D-45 Flip-up Offset BUIS so you have some sights to transition to faster from a magnified optic. They deploy fast and stay solid, the only issue is, they always deploy whether you want them to or not. The only time they seemed to stay folded and stowed was while they were in the rifle bag. When contacted, Diamonhead states that this is not what is supposed to happen and proffered me to send them in for repair. Many other users however have stated that this in fact is the norm. I won’t be sending them back because frankly, it doesn’t matter and feels “nit picky” to me, but if you were so inclined there you have it.

The only hiccup or issue we ran into with the C.O.R. Upper Receiver from Adams Arms was the lube it shipped with. As I stated in the video, maybe local climate had something to do with the decision but up here in New England, we were quite the opposite of impressed. We were told/found out it was Italian Gun Grease and based upon this showing alone I have no interest in looking into it further. It was sloppy and seemed to migrate everywhere when the gun was running, it gunned up really fast in the piston housing and worst of all, it froze. I have never used a lube, that froze the firing pin in place. we remedied the issue by putting all parts in thorough cleaning and degreasing and then tried both FireClean and Rand CLP. The Rand seemed to stay a lot better and the Adams Arms C.O.R. Upper Receiver ran like a top after that.

So with all that, this is a REALLY great upper. Solid built, weighing in a little over 4lbs. and with so many features included for a shooter let alone a competition shooter, the Adams proved to be a really good out-of-the-box ready to rock and roll complete upper receiver. Soft shooting and easy on all body types and frames it stays on target remarkably well and is super enjoyable to help you get more shots on target faster. If I was starting 3-Gun tomorrow and didn’t know where to start, this is a fantastic buy for all that and then some.