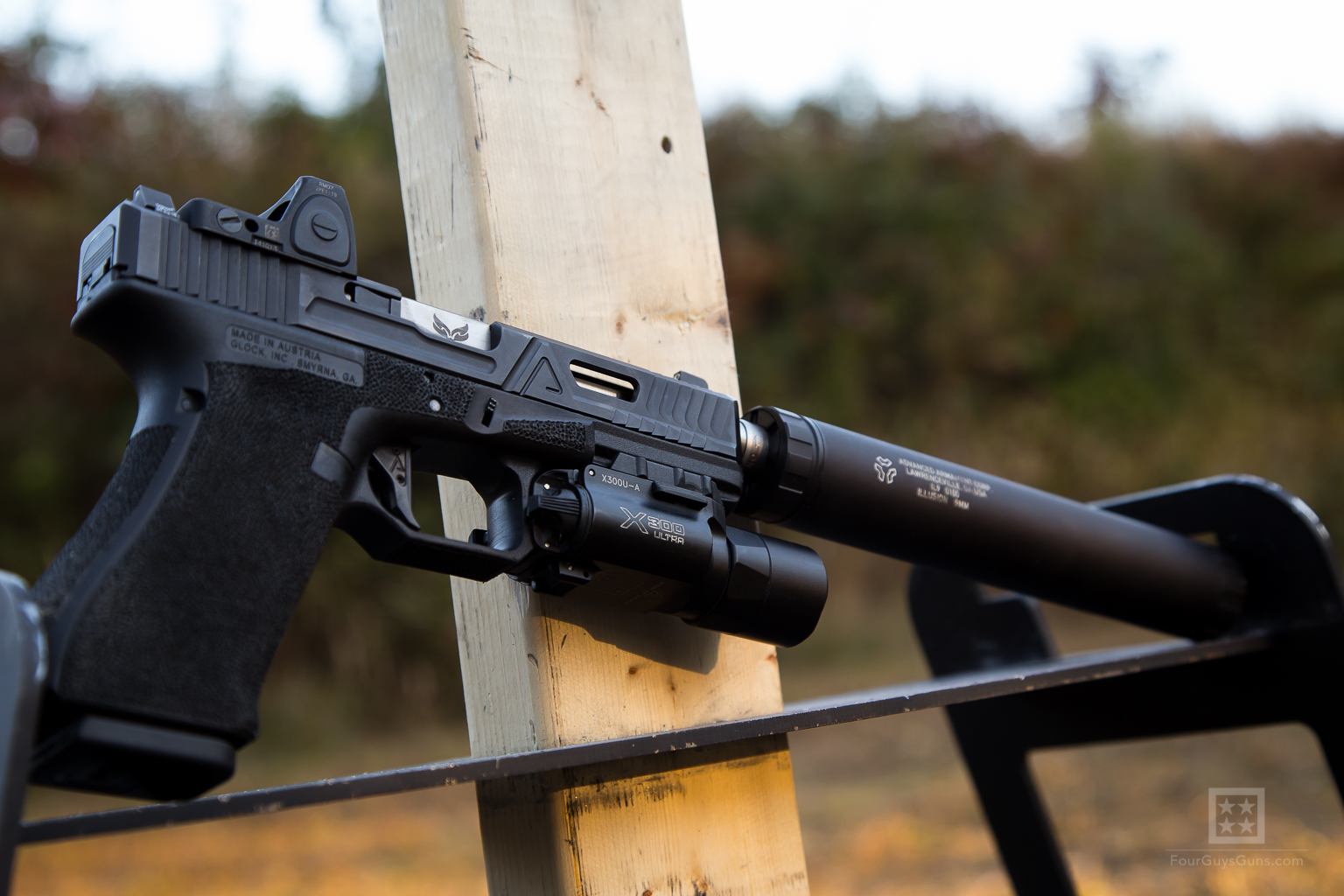 AAC (Advanced Armament Corp.) released their 9mm offset can dubbed the “Illusion 9) and we were fortunate enough to get to play with it for an extended period of time. The offset design is both convenient for accessories as well as offers a different utilization of volume for expansion. Many concentric cans (the majority of the market) have great success with changing the baffle design with spacing, shape and materials. While the offset design modeled after Hiram Maxim’s Design is intriguing and useful for many accessories, it also provided some areas of improvement.

The good features include the timing mechanism. it isn’t anything that is fancy or extravagant and has been a proven system on other silencers. It is simple, robust and to the point without involving extra parts or latches. It is built rugged and sturdy, from the baffles to the outer anodizing it was good to go through and through. Dropped several times over, in bags with other metal objects it acquired some minor scrapes and scuffs, all which easily wiped away. The offset design also allows for you to get going right away without the added cost of Suppressor Height Sights, or any quantity of them if you have multiple 9mm firearms but not the budget for several sets of sights. It is also thin enough of a suppressor that it does not interfere with many of the most popular weapon lights including the Surefire X300U, X300, the IR version, Streamlight TLR-H etc. So whether you want to run ALL the accessories or just a can, it’s all good.

The parts we struggled with were definitely surrounded by the “User Serviceable” factor. Once you take the Illusion 9 apart its like trying to put a jigsaw puzzle back together on a jenga tower while on a boat. While I am ok with the baffles not being numbered (it’s cheesey but I like it) they are also cursed with smaller than they should be keyed connections. Mind you this is all if you can even get all the baffles out after a spirited day of shooting. If you do manage to get the baffles stacked, in order and inserted…lining up the baffles is as simple as rotating the keyed stack around (don’t dislodge any) until they settle and lock into the proper alignment on Nielsen. Once that is squared away you can thread on the end cap which like magic (or proper timing) lines up the holes from end to end. In case you were wondering, we were not a fan of “servicing” this suppressor.

While supersonic rounds are supposed to be loud, even through a silencer, we were not that impressed with the sound or tone reduction. There was a definite difference between shooting with and without the can, enough that if you had to, one could shoot an entire magazine and then put their ears back on after some mild ringing. no worse than leaving a loud bar on friday night with an awesome cover band. Subsonic rounds (of course) fared much better and were hearing safe. I am using the term hearing safe loosely only because several mags it was still nothing to write home about. Would I rather shoot with it than without it? You betcha. I maybe just had higher hopes for this can with the offset design after seeing other companies have great success with it.

All is not lost however. I think this can has potential and hope Advanced Armament Corp. creates a next generation model. With my complete lack of an engineering degree I would say more offset and increase the diameter a couple millimeters. Include an alignment rod or tool and make the keying on the baffles more pronounced. It is very close to its competitors but not close enough to sway me, despite how much I like being able to take suppressors apart and clean them.