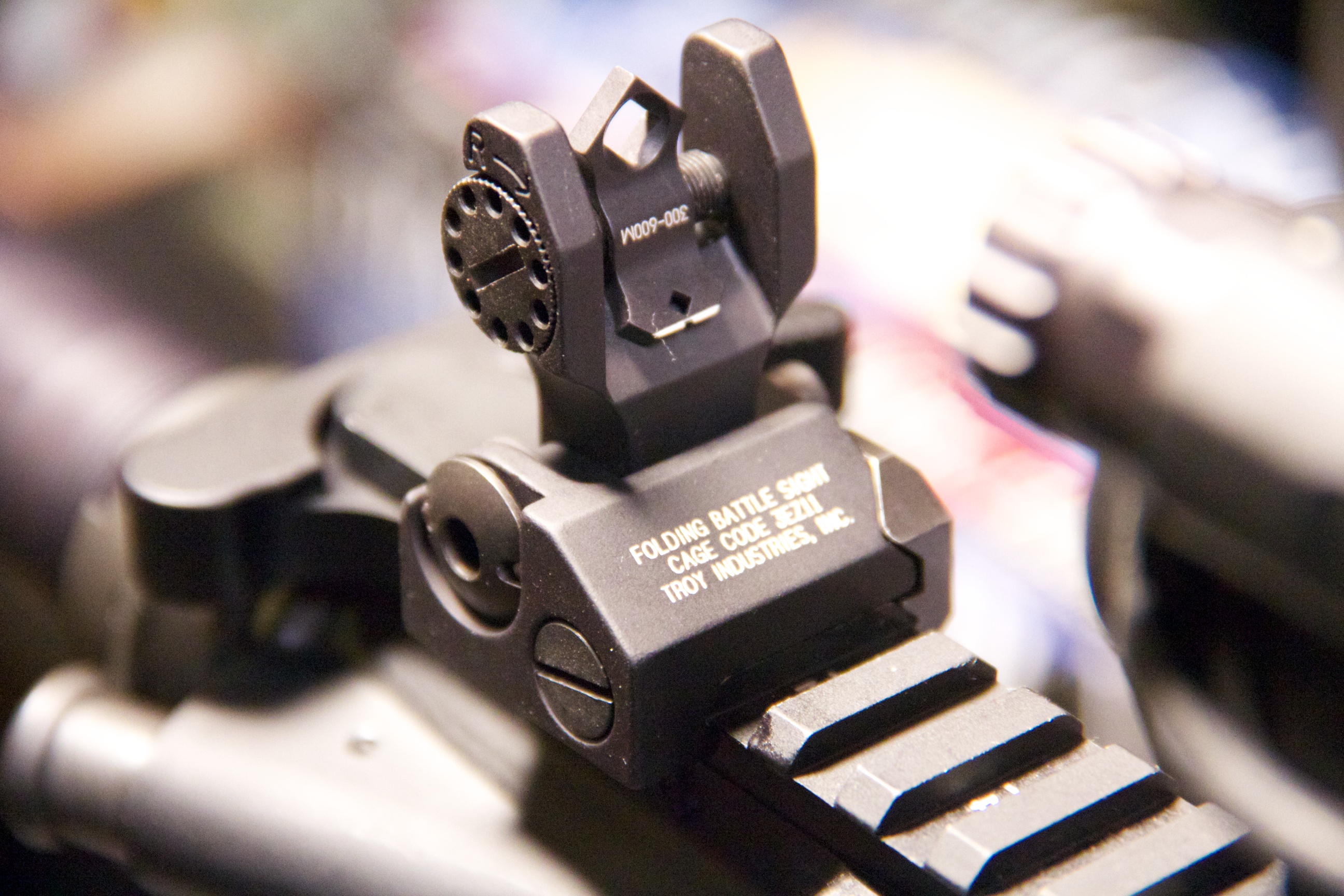 Sometimes we forget that innovation, whether it is a success or failure, helps move the next generation of products further into refinement. The Troy BattleSight Di-Optic Aperture (DOA) is no exception. Sometimes, as Gun Nuts, we get a little too stuck in our ways and forget to appreciate the innovation that brought those very ways to be.

The Troy BattleSight DOA is a step outside the box that, at the very least, I enjoyed.

I love Back Up Iron Sights (BUIS) because in my opinion, that should be an item that never fails. They should be rugged, they should be functional, and they should help me shoot accurately. I saw this new diamond shape on the Troy Industries website and wanted more information, but alas, not too many reviews out there. And as shocking as I know it is… many of the reviews were done by none other than older, stuck in their ways people. That doesn’t make them wrong, just biased. I wanted to try them.

We contacted Troy and they were kind enough to lend us a pair, so here we are to share our findings with you. Since I have rambled on already, and there is a video of me at the range going over a lot of this with pretty visuals and bloopers I will get right down to it.

Solid metal feel with a black oxide finish, they are constructed with stainless steel and 6061 Aircraft Aluminum. Just for testing purposes I didn’t even use lock-tite, and 90 rounds later…nothing budged. The folding aspect of it was great with a solid and positive locking feel in both the up and down position. They lay super flat at less than a half inch off the rail with nothing hanging off all willy nilly to snag on anything. Similar to many other manufacturers, you can instantly tell when you hold them or mount them on the rail, that this is the difference in Military Grade versus something on Amazon or eBay (no offense).

The diamond aperture, is where all the drama comes from. Since the peep sight was brought to be, it has been round. The eye is round, the eye naturally focuses round, round round round round. The Troy BattleSight, is a diamond…What gives? Well, to be perfectly frank, I have no idea. But I like it.

When using the larger aperture on a standard peep sight, I personally have a hard time centering the front sight post inside the circle. On the BattleSight, it was very easy. The corners and corner markers allow me to actually have reference points for the front sight to rest in in an instant, and I could acquire faster. Will this work for everyone because it worked for me? Probably not, but just because something doesn’t work for you, does not make it a “gimmick”.

I generally have trouble with the front sight on my rifles and have to paint them to aid in visibility. I don’t think I have ever shot so well with unpainted BUIS’s let alone painted ones as I did with the BattleSight. The video was not the best of my accuracy handi-work, but I was impressed nonetheless since I know what a terrible shot I am.

To wrap things up, I liked the BattleSight. I Would probably still add some paint to the front post as well as to the smaller aperture, but overall, I had fun sighting them in and getting to use them. Usually we work with smaller start-up companies to get our hands on great outside the box ideas like this in the marketplace. It was genuinely refreshing to try a product like this from a well trusted and battle tested name like Troy Industries. After talking with their team, I am real curious to see what they do next with their line of sights.