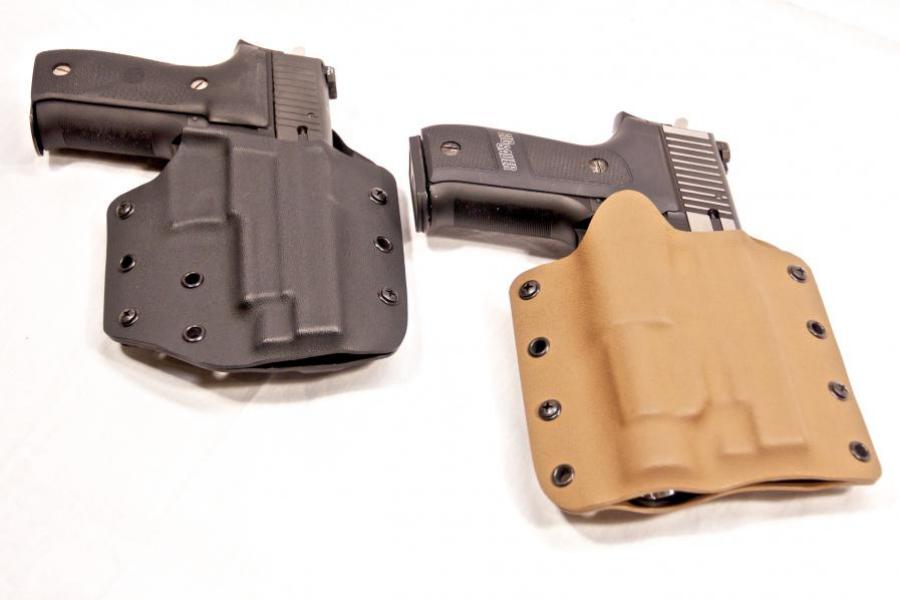 We really like Kydex. We have not received a single piece of Kydex from any manufacturer so far that we didn’t like. However, there are some that stand apart from others. Trojan Tactical is one of those that makes you notice a difference.

In a time where anyone who has a toaster, YouTube and some blue guns thinks they can make Kydex holsters, Trojan Tactical has put Function before Form, and we were STILL ooohing and aaahhing as we were taking the stills for this review.

John over at Trojan started making these out of a need, not a want. As an active member of the law enforcement community he doesn’t just build these holsters for the sake of being lightweight and long lasting, he makes these holsters Tonka tough! From the thickness of the Kydex Trojan Tactical uses, to the girth of the actual rivets and screws used to attach the loops to the sheath. These holsters are built for hard labor and they look and feel the part.

Trojan Tactical sent us one of every model they make to test on our Sig Sauer handguns. We were sent a Scabbard, a Light Bearing Scabbard (Scabbard LB), and an Inside the Waistband (IWB) Scabbard they call the “Trojan Horse IWB”. We actually received 2 Scabbards because Lou is a bigger guy and loves his P220, the rest of us rock the P226.

We instantly noticed the difference in Kydex used vs. other manufacturers we have seen and used. It seems about 50% thicker than most that we see and made us stop what we were doing and size it up further. The rivets that hold the Kydex together are standard issue looking, however the hardware that holds the belt loops on place just looks, feels and is beefier than most. The belt loops were big and rigid without being cumbersome or impeding, and slide on and off the duty belts and riggers belts with ease.

Many companies put a lot of emphasis on the “detail” in the Kydex which refers to the imprint of the actual firearm on the holster from forming to the weapon during creation. This is not the case with Trojan Tactical. Thicker material seems to yield less detail, but an increase in durability and ruggedness. In John’s line of work, I think one is definitely valued a lot more than the other, and as cool as it is to see the checkering on your gun on the outside of your holster, I would rather have one that will take a beating and then some while maintaining its retention and mold on the inside. Truth be told, I am already talking to Trojan Tactical about doing another LBH in Red and Black because I liked it so much. Check them out at trotac.com and on Facebook!