The Blitz by Falkor Prototype 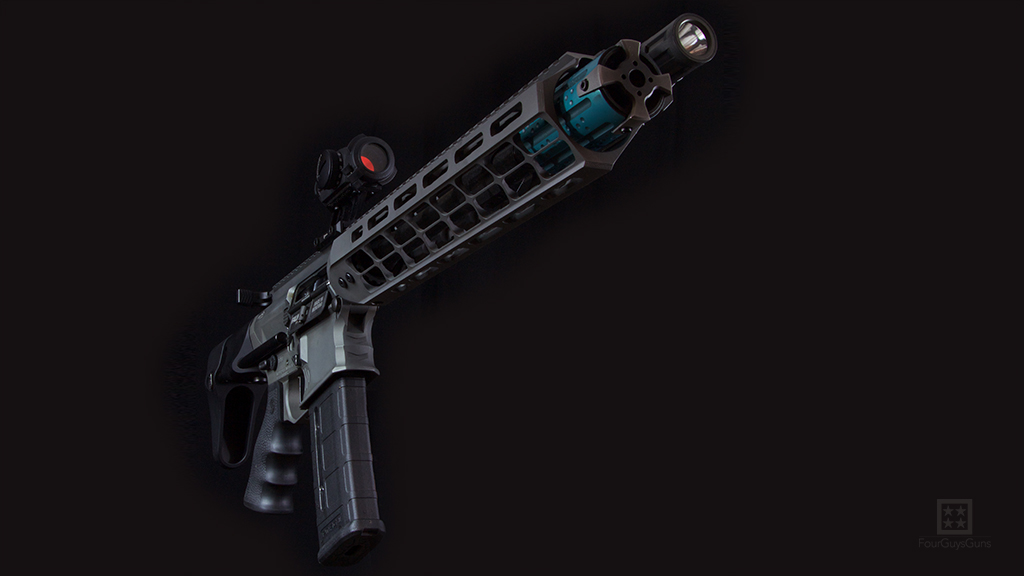 Prototypes are not something that commonly get sent out to media outlets. Especially of the SBR variety, and even more so with experimental muzzle devices. You can imagine the excitement as we met the UPS guy in pajamas when it arrived as we signed the electronic pad as incoherently as possible with a Parkinsons type jitter.

Unwrapping the packaging and opening up the hard case we were greeted by a filthy animal. Even in her carbon coated state, she was damn cool and the type of firearm that gets you all excited and interested in guns all over again. We see a lot these days, between experience and real life when it comes to “new” and “innovative” ideas. This was no different a day than any except that it’s physically in my hands and not just a cool image, video or “unboxing” (if you can call that a review). I made a quick text and call to Clint at Falkor Defense letting him know it was received and to inquire about the filth.

“I was in a rush, and I want you to test it and tell me what you think,” was the fearless response from one of the creators of this SBR. That is not common either. Who sends a filthy, used, carbon coated rifle out to a media company to review? I honestly have never seen that before, and just thought to myself “Game On.”

Off we went to the range with a measly 300 or so rounds. Day one was just a warmup and more geared for the stills than really putting a new gun through its paces. Did not lube it, clean it or pamper it, just got right down to business. Business was good as this little monster began spitting fireballs and running like a sewing machine. Despite the fouling, the build up and a clear need for a bath we had one hiccup from a mag filled all the way to 30 on the first day and that was it. The issue would have been easily rectified with a forward assist, but the Blitz is a slick side receiver and there was no way other than drop the mag. Bolt automatically closed with round in and we were back to work.

So, off we went back to the safe where our main man Monkey cannot deal with dirty guns in his house. He will stay up all night if he has to, but he is going to clean one way or another. So the Blitz got a bath of the Hazmat variety as only monkey can do. It was needed and overdue, but it also gave us a good inside look at some of the inner workings of the Blitz, the receiver, the BCG and the buffer on the MVB Arc PDW collapsible stock.

The Falkor Blitz is based on the Ambidextrous design originated by SI-Defense and it does not disappoint. Personally I am not a fan of Ambi-anything as it always seems to be some clunky add-on or bolt-on or goofy workaround that interferes with normal operation from “standard” AR configurations. The team at Falkor approached it from an engineering standpoint and not a “Band-Aid” type solution. The ambidextrous controls are mirrored perfectly in size, shape, and location on both sides of the receiver. The control surfaces of all these components are cut very deep and aggressive, which aids in actuation without making them larger or obnoxious. In fact they are smaller than your standard parts found in a Lower Parts Kit. They are also not standardized parts which some may complain about but let’s be honest… how often has anyone ever changed their mag release button and or bolt catch. These control surfaces and shapes of them blend nicely with the receivers and their “standard-not standard” shape.

All the core elements of an AR-15 Upper and Lower receiver are there and function as they are supposed to if not better. A bold statement since we did not have a lot of time with the Blitz. But there are both aesthetic as well as performance upgrades to these receivers at the manufacturing level that we noticed and appreciated. Like the thin and ever so slightly flared maxwell, the cuts and grooves for finger placement, design cues and logo placements all over the receivers. Some bold, some subtle bt all cut deep and pronounced as if to proudly say “I am Falkor, and Here I Am.”

Another one of the interesting items was the Bolt Carrier Group itself. it had all the same parts and assembly methods you would normally see and disassembled pretty much the same as any other… but the rear of the BCG has a different shape to it. Almost like a mix between an AR-10, AR-15 and a piston rifle. When asked for more detail about the design, we were given an abundance of information talking about carrier tilt AND carrier walk. Carrier walk, well thats a new one to me. After much discussion as to what it does, how it works and how it affects accuracy, I decided to save that info for when we look at the Petra 300 WM or the 308 Falkor makes as an SBR “review.” Talking about prototype parts and accuracy is a whole other write up entirely, but one we will cover, I promise you.

Notable features include the MVB PDW stock, which has a cool factor of course and I am sure a purpose. It was however finicky after countless hours of firing, being in the sand and dirt and was overall uncomfortable to use. Falkor as I am told has no plans to move forward on that design and is leaning towards more of a fixed position type stock. In all fairness and as stated, it has a purpose it was built for. It makes the SBR ridiculously short overall length, extended has a lot less flex and takes a pounding. For this SBR though I would have liked a better cheek weld is all.

The rail itself I found out was also sort of an experiment. The one on the Blitz we messed with had machine marks are some rough cuts on the M-Lock portions. We found out it looked this was because it was machined BY HAND and we were holding the very first final draft. I must say, I have seen final products that had similar marks and they were machined by an automated machine. This leads me to believe that the quality of machining and attention to detail the team at Falkor is top notch. We shot the SI-D 308 a few months ago and it was smooth as silk in appearance. Combine that machining with the stuff done by hand and there are no doubts in my mind that Falkor is as concerned with design and appearance as they are with functionality. That means a lot as they seem to be one of the few leading the way towards a new generation of manufacturers. Manufacturers that understand design matters too.

Finally let’s talk Blast Cap. The Blast Cap muzzle device is a muzzle device that literally dances the line between NFA and concussion. With four bolt on ports, the “iron cross” segment of this two-piece design can be swapped in and out for other future designs for different desired effects from gas and recoil. In it’s current configuration it works like many other Linear Compensators by pushing and directing all unburned gas and concussion forward. There is some shenanigans in there however helping to direct that swirl of fire and fouling vertically once the round has exited. We saw it multiple times with the High Speed Cameras and it was a truly interesting thing to see. Part mad man, part genius and all awesome as you rip another 3 foot fireball out of the muzzle.

Overall we ran over 1000 rounds combined between our shooting and some others we were with testing it out. (The guys from TheGunCollective will have their say about it in the near future as well). We had one or two times where full mags did not want to allow the bolt to seat the round and that was it for mechanical issues on Falkor’s end. The MVB stock, that’s natural for anything with that kind of machining and actuation when put into an adverse condition and we have seen it before. Again, parts and purpose. We are spoiled with our multi-ported muzzle breaks and whiz-bang devices, so to us it felt like the Blitz was a bucking bronco. Upon review of the high speed footage though, it really was not moving all that much at the muzzle and the only thing that needed recalibration was our egos. You know, because we are so operator (sarcasm). You will see some flip in the prone however, but that was because as stated before, poor to no cheek weld.

Personally, I am very excited to see what the future holds for Falkor Defense and the direction they are moving in. Once upon a time people handcrafted and shaped wood, hand laid metal and engravings. Many companies still do and we fawn over them for true craftsmanship and styling. Much of this is lost on the AR generation as so much is forged or machined to tolerances and perfection all handled by CAD programs and automated machines. Falkor Defense is finding modern ways to bring design and aesthetics of a modern world into this platform and I think we should all celebrate it.