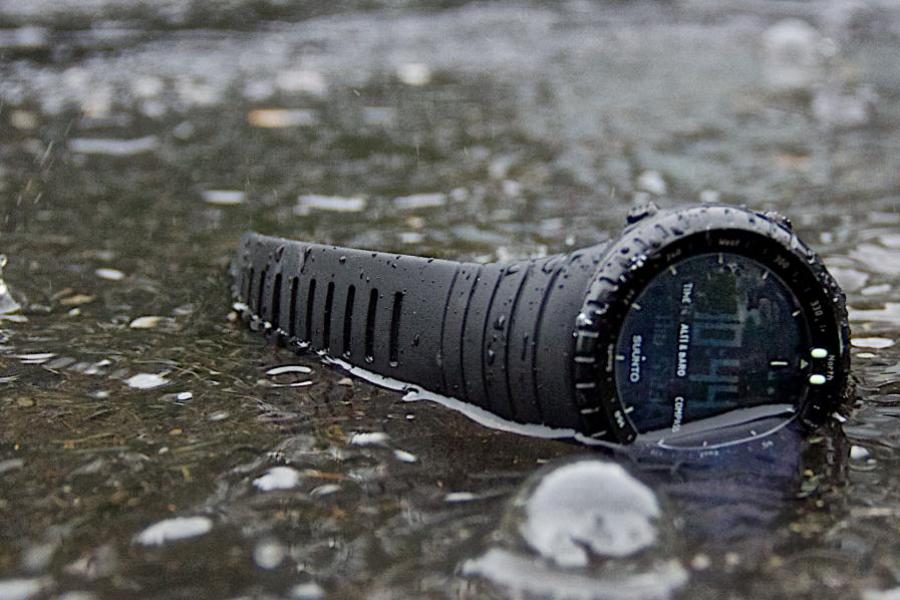 There were a few features on it I didn’t feel I would need or use and the visibility of the actual display was a concern. There was something about it though that kept me looking into the Core and researching reviews and specs. I finally pulled the trigger on it and bought one and haven’t looked back since.

The Suunto Core All Black is amazing. Flat Black and murdered out across the entire watch with subtle silver and white fine markings pointing showing you where to find your data. Wrist-top computer is more like it but think less calculator watch and more Tony Stark. Even the inverted face is all black with only the numbers and data showing through. I say data and not time because there is a lot going on on the watch face without a lot of clutter. Simplicity and detail in a quick glance can tell you what time it is, the past six hours barometric pressure, date, altitude, depth, temperature and even which way is North. Did I also mention this watch weighs almost nothing?

The Suunto has a lot of feature benefits for a wide variety of uses and needs. The User Manual however makes it all simple and easy to learn the controls and operate them. The operations and control of the watch are also the easiest to navigate and use of any watch I have ever used. Seriously, it’s almost as if they employed an actual UI designer and not a computer programmer to help you get through the menus and functions in a fast and efficient manner. It’s on the same level as iPod classic navigation with a quick way in and out of the functions as well as a super convenient lock out button so you can keep the info you want on screen without inadvertently changing the display with accidental button pushes from your gear, wrist or whatever it is you do.

There is no way to tell you all the awesome features without writing a 10 page dissertation and it is equally difficult to do a video review without you staring at my wrist while I talk in the background. Instead, I will give you a “lightning round” of awesome.

The band is replaceable, light, flexible and can be tightened into a non-slip tension without cutting off circulation. The band keeper also has a notch in it to keep the excess from slipping out and flopping all over the place, essentially doing it’s intended job better than any other watch I have ever had… ever.

The rotating bezel is a knurled anodized aluminum and when scratched shows awesome character marks as it shows the raw aluminum through. It also has 2 glow in the dark inserts that retain glowing power fairly well. Lastly, it protects the glass perfectly as it is raised at a higher level…scratch the ring, not the glass.

The all black inverted display is not as hard to read as some reviewers have made it out to be. If you understand how LCD displays work on digital watches and aren’t expecting a perpetually backlit LCD display (like an iPod) then this is the perfect combination of stealth and legibility. It also benefits the blue backlighting and stands out even more since it illuminates the actual numbers and not the whole face.

The battery isn’t a nightmare to change or find the right size for. CR2032, just like many optics, computers and many other things we use. Plus, it’s user replaceable with a flathead, a quarter, a backhoue… whatever has a flat edge on it. Super easy without the need for finding that set of super tiny screwdrivers that you had once upon a time and remember seeing somewhere around the house.

The menus are easy to navigate and find your way through with simple x’s, minus’s and selects. My most common uses have been Day/Time/Date, Sunrise/Sunset and Dual TimeZone. Storm Alarm is always on and is generally spot on to within 1-2 hours of warning. Living in New England though, be ready for that thing to go off daily. We have a saying up here, “if you don’t like the weather in New England, wait 15 minutes.”

Need to find North, or maybe even need a constant reminder which way you are supposed to be heading? Boom! It does that too with bearing tracking and Cardinal directions. Think “waypoints” for the gamers out there. I had no use for Altimeter or Depth Meter but they are in there as well. The only thing that was a little disappointing was the temperature. It reads your skin not the air, but to be fair…it’s on your skin…duh. So great for those that are concerned with their body temp, especially their extremities.

I could complain about the price of this watch all day, until I wore it, used it and beat on it. Ask anyone who has one, has had one or is currently wearing one and the absolute last thing they will bring up is the price if they can remember it. I was skeptical as could be because like I said, I have had many watches, some more expensive that didn’t even last that long. I have barely taken the Suunto off at all in the past 3 months because I barely know it’s there and furthermore, I always expect it to be there. At $299 this thing is a steal.

Special thanks to The Über Group for the Help, another great product to review!