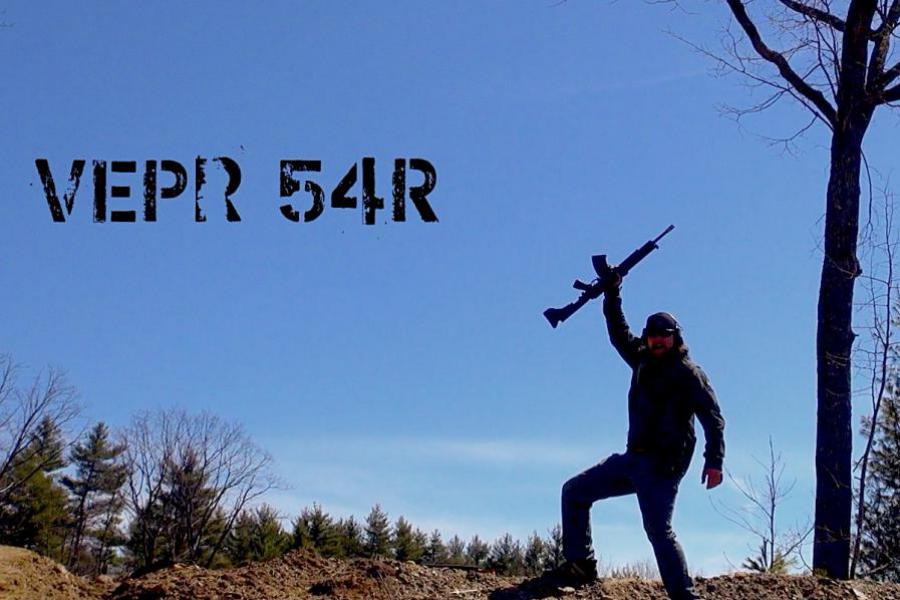 This story starts with a weapon I know literally nothing about. Compound that with the twisted mind of Owen from Snake Hound Machine and a bunch of 7.62x54r low cost surplus ammo, what do you get. I’ll tell you what you get, you get one of the coolest rifles I have ever fired.

Let me get a few things clear right off the bat.

I am not a fan of the AK platform. I am not a fan of the 7.62x54r cartridge. This is not the first of either option I have fired and as of right now will not be the last. I will not go into great detail as to the why’s and why not’s because that is for another time. Be warned however, this will start reading like a promotional ad because this rifle is that much fun. I didn’t fully appreciate how fun or amazing this rifle was until after editing and watching all the video over and over again. Owen has outdone himself in my opinion but don’t get too excited as it is a limited run. He is only doing 6 of right now and is not a normal item in his catalog which translates to “want it more.”

Now, with all that out of the way let us get down to the business. The VEPR 54r from Snake Hound Machine is far from a run of the mill furniture swap with minor enhancements. Owen has been developing his own tuned trigger system which, as a self proclaimed hater of the trigger system in an AK, I love the work he did. If I ever own an AK, it will have a SHM trigger in it. Period. He then puts an enhanced Kreb Safety, oversized (what I believe is) Tromix bolt handle and a U.S Palm grip. Not enough you say? That’s cool, because the 16” barrel is adorned with one of our personal favorites, the Ares Armor Effin-A compensator that has been tuned to perfection. Add a custom milled receiver block and a side folding Magpul UBR and we can start playing the Barry White.

The noticeable fact that stood out most to me is that this rifle is solid. I have been acquiring a favorite past time of punching, shaking and dropping rifles recently. I don’t care who makes it at this point because unless it is the only one in existence, is a showroom safe queen or have been explicitly asked not to… I am going to shake the rattle the sillies out. The SHM VEPR 54r had not a single rattle, shimmy or shake after me beating on it while Owen was on the phone at the range and unable to protest. I do love me a solid rifle and this one is a rock.

I have disdain for the 7.62x54r round because the first thing I think of is Mosin Nagant. Now don’t get me wrong, the Mosin rifle is just fine, and has clearly stood the test of time. My reasons though, are for another rant. The fact is, the 7.62x54r cartridge is abundant, it’s cheap as hell, and it’s a big frigging round. The only down side is the corrosive nature of the round, luckily all these AK type actions clean stupid easy. Cram snow in it, hose it down, windex,palmolive and a scrub brush whatever just dry it and oil it and put it away. The SHM VEPR 54r utilizes this round in a way you can never experience from a Mosin and that makes me VERY happy happy happy (Duck Dynasty is on in the background).

Did I mention that this weapon is fast? I mean real fast. I didn’t really notice it while shooting because I am accustomed to shooting ARs but while editing and scrubbing through the video it was common for me to capture 2, 3 and 4 rounds in one frame. Now, it really isn’t common to see a 7.62 round coming off that fast in these parts but with the recoil mitigation from the tuned Ares Armor Effin-A and that Magpul UBR… that big girl was flat as a board and cycling like a full auto. And my trigger finger isn’t even that fast! That’s Superbowl’s dept. You know what else helped… the brand new “Snake Oil” lubricant, that stuff was slick as hell, but I will let Owen break that out to you.

My only complaint about this rifle is the iron sights, but AK irons are horrible in my opinion anyway. If Snake Hound Machine could find a way to incorporate either Tech Sights or some sort or rail system should he ever decided to do a full line in the future; but that would not impede my decision to buy this rifle by any means.

I may break Owen’s stones a bit but I can genuinely say he has built a fantastic rifle. It was solid, good looking, a blast to shoot, cheap to shoot and of course I can’t get one which means I must have one. One thing I am sure Owen can attest to is that I have never shined him on. I honestly and truly REALLY liked this rifle and would love to get his VEPR 54r SASS version in my hands to own some day.

Or this carbine one…

Or any of them…