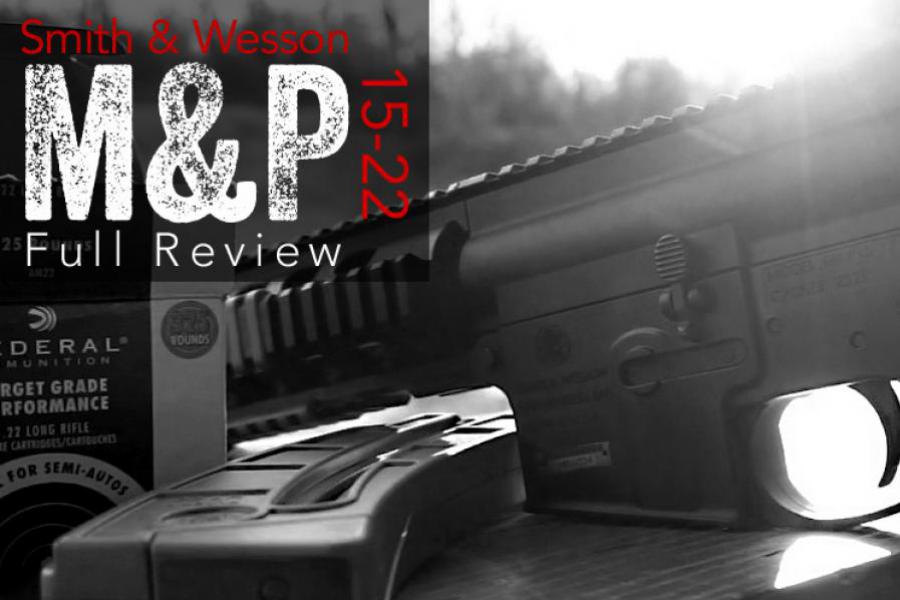 The quintessential American plinker is almost always, a 22LR. With the dramatic introduction and popularity of the AR-15 into mainstream media, all shapes and forms of the platform are now commonplace and when combined with the 22 caliber there are few who stand out in the crowd. The M&P 15-22 from Smith and Wesson is one of the finest representations.

It took some time to get our hands on one after last years ShotShow due to the “Great Gun Grab of 2013” as millions of Americans, both existing and future gun owners jumped to get their very own AR. The M&P15-22 is a steal at the price-points they are offering and after putting a few thousand rounds through one I can fully understand why. It is light, it is reliable, and most of all it is almost an exact representation of a full size, 5.56 Caliber AR-15. All controls, all fixtures and functionality are identical to it’s larger caliber big brother and it allows for seamless transitioning for everything from teaching to training to cost effective plinking and on a familiar frame.

I was surprised at the amount of polymer used in this rifle. That’s not a bad thing, it just caught me off guard. All picatinny rails, sights, flash hider… everything, is identical to a full size AR-15 with the only exception being the internals. Not seeing a buffer, buffer spring and even the short representation of a charging handle was a bit different to me. Now that I have shot and played with it quite a bit, I just giggle and comment on it’s “cuteness” internally. All the polymer used seems to be very strong and reliable and I am sure helps in not only usability by a wider audience, but also in keeping costs down. Another nice touch on this rifle is the furniture and sights. Smith and Wesson didn’t go the route of using cheaper or lighter “Airsoft grade” products, they used the same MOE furniture and the same MBUS BUIS as any other rifle. So you can rest assured that all the parts on the M&P15-22 are up to snuff.

The Smith & Wesson manual clearly wants you to use quality 22LR ammo like CCI which is known for fantastic, jacketed and clean burning 22LR ammo. We were a bit more realistic in our testing due to both real world availability and what most people will use the most of. That would be your bulk-brick Remington or Federal brand 25-550 round box from wally world that we tested in conjunction with over 500 rounds of CCI MiniMag. I am happy to say that not only did it fire all of the ammo we threw at it, but in over 3,000 rounds I did not experience a single misfeed, stovepipe or even dud round. Not a one. Maybe I am just lucky (at least on the dud, that was shocking to me) or maybe the M&P 15-22 is just built damn well.

What really separates the Smith & Wesson 22 offering for me is the location and function of the controls. Several brands make a 22LR AR platform rifle, but the magazine release is moved, or the safety is relocated or many other differences. There is also the option of utilizing a 22LR conversion kit or swapping out an upper. Those are all great options to maintain consistency in training mechanics and functionality, but for the price, I will take the full size ready to rock and roll out of the box S&W. I am personally not a fan of interchangeability of calibers on platforms but to each their own.

Overall I would recommend the Smith & Wesson M&P 15-22 to anyone and everyone. The biggest take away I have from the entire review process was that this rifle was simply, fun. One of the most enjoyable and consistent experiences with a rifle since I started shooting. This rifle embodies everything great about the joy people get from shooting. The usefulness, the training capabilities, the cost effectiveness and the hours upon hours of shooting fun make this rifle one of my favorites. This is the rifle I would teach my son or wife on and have full confidence they could handle it and would want to shoot more. If you have never owned a 22LR rifle, you need to and make sure you don’t pass this one by.