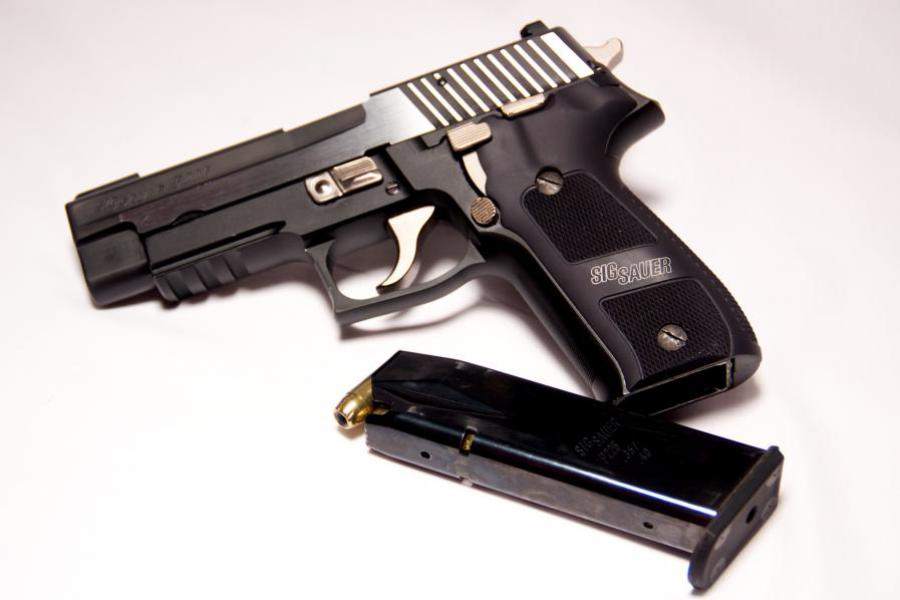 The Sig Sauer P226 had to be revisited, it just had to. This is the only pistol almost every member of the four of us own and love. It is reliable, accurate, and easy to manipulate.

I have said it before and I will say it again, this feels like a weapon. We can talk all day about 1911 this, and polymer pistol that, at the end of the day I like a lot of those pistols and then some. The Sig Sauer P226 however has always felt right at home to me.

The ergonomics are something I would put the most emphasis on. The ergonomics and controls. This is a 34oz. Nitron finished slide on an alloy frame, which doesn’t make it top heavy, just gives it the kind of weight that lets you know it’s there, and it’s not a water pistol. That weapon is here to do stuff if you let it. When you raise the pistol up whether one hand or two, it aims naturally and is easy to get the sights on target.

The controls is the other part of the ergonomics equation. I much prefer a de-cocker to a safety and the location of the de-cocker on the P226 is placed perfectly right between your slide lock and magazine release. It even operates on a slight curve just to make the action even smoother with the same thumb, with minimal handling, I have access to all three mechanisms without having to “feel around” or look at the locations of these controls.

Reliability is something every gun owner wants out of their weapon. I can personally vouch for well over 6,000 to 7,000 rounds through my .40 and easily 5,000 rounds out of Monkey’s Sig without a single failure to eject, double feed, misfire, jam, stovepipe, you name it. The barrels are strong, and accurate and after all those rounds the rifling grooves are still pretty good cuts. Accuracy wise I am probably the worst person to validate handgun accuracy outside of 25m. And even then, I am only probably 85%. Monkey and Superbowl however can do pretty decent groupings with their 9mm’s at the same distance.

The sites are generally SigLite tritium night sites, but there are other types available as well like the TruGlo tritium and optic front sight. The sights are pretty standard albeit very visible. This isn’t a marksmanship pistol with adjustable sights, but they are rugged and visible and that’s all that matters. Easily visible in all lighting conditions. I mean jeez, you can bury this thing in a bunker, underground in pure darkness for 5 years, and those sights will still be glowing ready to go.

I have yet to fire a Sig Sauer DA/SA pistol that didn’t have a fantastic trigger. It is a little hefty in double action, rivaling many revolvers at 10+ lbs. of pull, but a solid yet light clean break of 4 lbs. in single action. The Sig trigger is consistent and predictable aiding in it’s accuracy through your accuracy. Less hiccups between you and the bullet leaving do nothing but make the projectile fly straighter.

This 4.4” double stack pistol is not my first choice for Conceal Carry. There are people that CAN do it and I am not one of them. In the cold winters up here in NH though I will “Open Carry” the Sig with a jacket (I say “open” with “quotes” because it’s”technically” concealed since a jacket is covering it.) A full size pistol is not easily concealed for me so I generally use my 226 for training classes, for target practice and it’s the go to pistol for me when it comes to home defense. The picatinny rail holds many different brands of lights and lasers for added versatility.

To wrap things up, the Sig Sauer P226 is a tried and true, fantastic all around full size weapon. It is employed by many government agencies, armies, countries and countless more independents. You get what you pay for with most weapons and the Sig is no exception. MSRP ranges from $990 – $1200+, but you can find them at dealers for around $850 and up brand new. Even better news for some, used Sig Sauers also fetch a good price too. I have seen as low as $650 for some used model P226’s. It is a solid weapon for a sidearm, it is a great pistol to have and it is one of my favorites to run. If you ever get a chance to own or fire one, I highly encourage it.