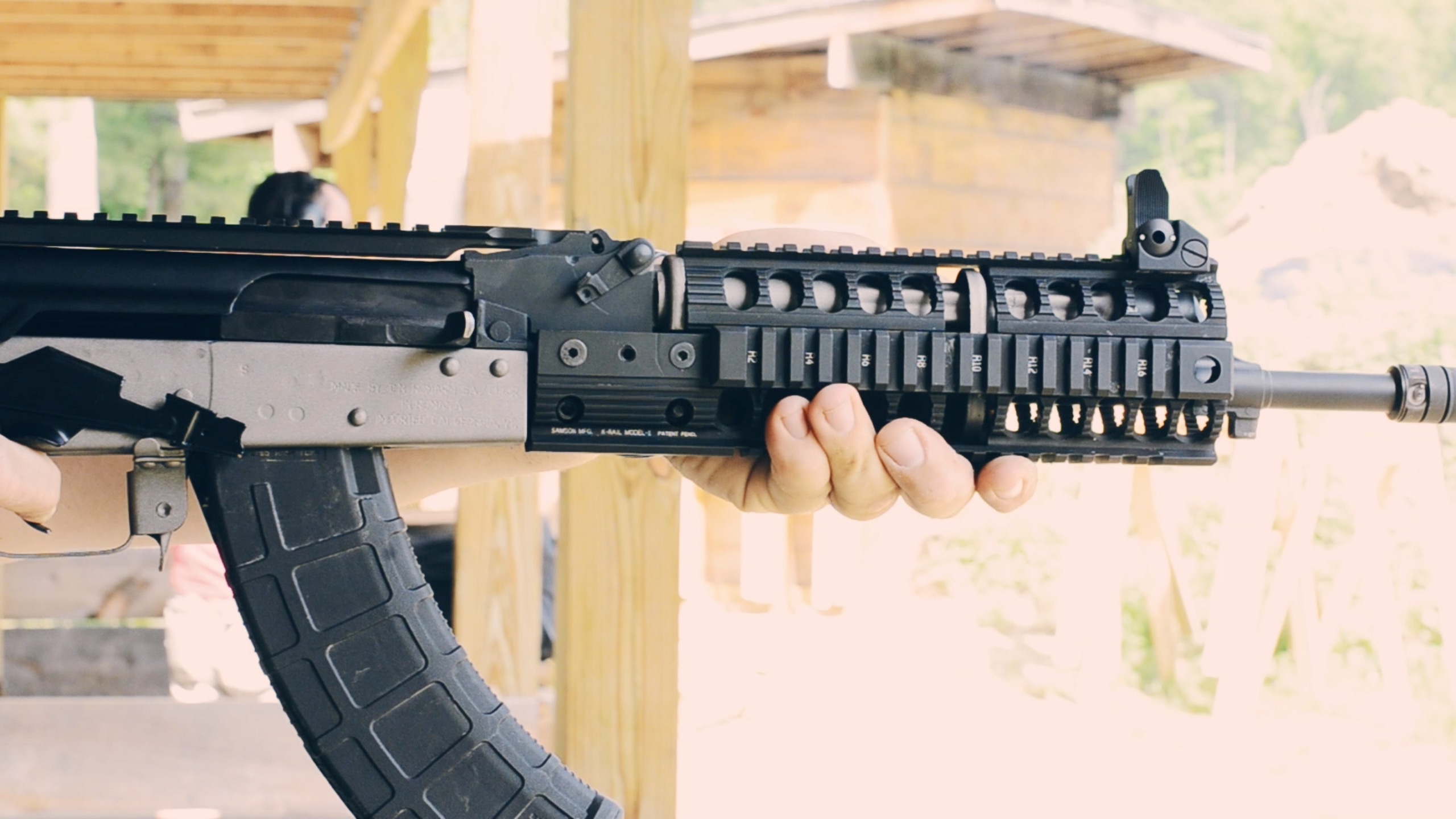 Look at other markets and hardware in the firearms world. Whether we are restricted by bureaucrats and legislation or maybe simply stymied by lack of innovation, firearms as a whole are looking more inward at refining some perceived “perfect” platforms.

The AK is naturally an aggressive and menacing weapon in appearance. Couple that with a 7.62 x 39mm round and you have a lot of meat to contend with. Angry, angry meat. To bring this iconic rifle up to modern standards adjustments must be made to accept things like lights, sights, lasers, grips etc. Mind you the rifle will still operate without all those things and perform as it should. So again, why? Because people want to, and when people WANT something there is a market for it. This is where the Samson K Rail Model-1 comes in.

There are a lot of variations of the AK out there. Between the years and years separation of the manufacturing process, to materials used, country of origin and import/export rights it is hard to say any two stamped AK’s are genuinely identical in fit and finish. With that comes a lot of fitment issues accessory manufactures have to contend with when making things like a rail system for the AK. The model we used was a Century Arms Romanian WASR 10 that had a rough life.this rifle was adopted with no magazines, a stripped set of threads on the barrel, missing screws in the trunion and aging wood. This is the perfect example of a good time to “update” the rifle. The K Rail does a great job with a combination of rugged reliability and simple installation. One of the hard things between AK variations in particular is getting a rail to mate up with the receiver in a manner we are used to see on AR platforms. I tried a couple that were loose, wobbly or simply had massive gaps that aesthetically weren’t pleasing at all. The Samson rail fit the bill pretty good.

Minimal tools and minimal parts make assembling the rail on your AK super easy and quick. It took me longer to get the old and stuck on wood forend off the WASR than it did to install the K Rail. The only hiccup, but one which is to be expected with just about any part on the AK, is loctite. Use it liberally, and you will have no issues. It adds a noticeable amount of weight towards the muzzle which is a good and bad thing. The added weight does not make the rifle any lighter, but it does aid in recoil management. So if you want a flatter shooting AK, one of the things you can do is gain that weight and lift a little more. The six screws that pull against eachother and also pin the rail against the breach stay put when properly tightened down and loctite applied. Goes on simple and stays on is something I am a big fan of. All in all for the value factor alone this is a very affordable, rugged and solid upgrade to your AK. There are some improvements I would like to see though.

Like I said the weight is a positive and negative. Quad rails are cool if you have a need for them but taking cues from the AR-15 market… weight is the bigger focus point. Making things stronger and lighter simultaneously is the trend that seems to be fairly slow to the AK market. If Samson had made a KeyMod or even a newer MLOK rail to go with the AK, they would be much lighter and more current and competetive with other newer rails on the market.The ridges on the rail between the horizontal and vertical picatinny rails looks cool as hell and adds to the aggressive styling of the AK’s persona. It’s very similar if not identical to the insides of the Samson Evo rail which is meant to aid attachments. On the outside of the rail however it helps grate cheese like no ones business.

Overall for $250 this is a really solid and easy to install upgrade for your Kalashnikov. The pro’s by far outweigh the cons and I was very happy with the look, fit and finish of the product as a whole. Wear gloves, use loctite and enjoy your knew shoulder muscles because it’s worth it. Check them out at www.Samson-mfg.com and if you want to see the installation video, luckily Andrew did that for us already here: https://youtu.be/XlzWtTPKczg?list=UUhPoH8HtGu5QlCx9BSG4y2Q