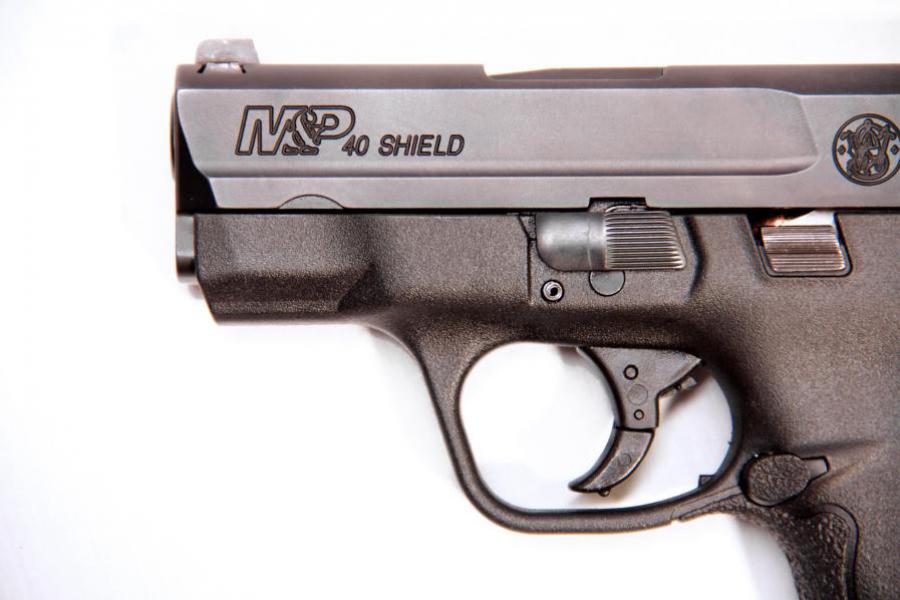 There are a lot of options out there for concealed carry. A LOT. Concealed carry is older than firearms themselves, and with all that time, many have developed some excellent CCW platforms.

Many a manufacturer has had lots and lots of time to develop smaller packages with more/less parts in varying calibers. Coat this, night sight that and slap a laser on it. The S&W seems to have had a little more attention paid to it largely due to the teasing hype before release that I am sure helped sell them a LOT of pistols.

Teased and released in a fashion usually utilized by a certain computer company, the M&P SHIELD quickly became one of the most sought after pistols on the market. The SHIELD 9 was quickly sold out everywhere. In a similar fashion to the afore mentioned company, a follow up was soon released. Was it different or special? New color combo or maybe sights? Nope. Bump it up to a .40 Caliber with the same shape, size and form factor. Commence selling out.

We just so happened to be in the right place at the right time. I only had to hold this thing for about 30 seconds before some random stranger asked “you gonna buy that? ‘Cuz if you don’t I will.” which I promptly looked at the salesman and said “i’ll take it.” We went directly to the range… did not pass go, gave up $405 and began trying to figure out how to explain to Misses Whitey why we needed this pistol.

The first impressions of this pistol were fantastic. I liked how it felt in my hand, I liked the round size upgrade to the .40 from the 9mm and most of all I liked that it’s take-down was similar to many other pistols I own. Recoil as compared to a similar sized 9mm was negligible at best. I was a little weirded out by the trigger, appearance-wise I should specify, but it did remarkably well for a Double Action Only Striker Fire. Th trigger felt more like a single action and way better than any full size M&P I had fired too. In fact, Apex already has some parts available to make it even better as well. She was accurate, small, had a good trigger break by comparison to similar models and I was falling in love. Until the magazine “popped” out.

Now as far as a CCW goes, you definitely want to fully trust and rely on it. The last thing you want when you need a pistol most is for something terrible to happen like a malfunction. A magazine disconnectafter the first round being fired is not exactly “confidence inspiring.” Change mags and cycle, not a problem. Back to the other mag, not a problem. Maybe I just hit the magazine release… I’ll try it off hand. No dice. Just as I am about to put it out of my head as anything more than a fluke, there she goes again. What the hell.

To be fair, we never cleaned this thing. Right from the factory, to the shelf, to the range. No cleaning or de-gunking, no grease was removed, we just went right at it. To make matters worse, it seemed to only happen on the 7 Round mag. I tried with the pinky on, pinky off, two hands, off-hand, from concealment and even with my weak hand. I could not get it to replicate, ESPECIALLY on camera. But it ONLY happened with the 7 round mag. The problem has since been resolved and with no official comment from Smith & Wesson, conclusions have been drawn.

Customer Service at Smith & Wesson was probably one of the most hassle free experiences I have ever had. They had heard of the issue and already had a fix in place for it. Turnaround time was two-weeks I was assured and the shipping label was in the mail. I believe (I could be wrong) that the gun community can go one of two ways in a situation like this. One, company fixes problem with little to no explanation and you go on your merry little way carefree because they said it was fixed so all is good in the hood. Or Two, company fixes problem with little or no explanation and you no longer trust or value the weapon and either shelve it or sell it.

I find myself somewhere in between one and two so here is what I have figured out. Those mag springs are tight as hell and the only time I ever had the issue was either at max capacity or at max capacity +1 and it was always ONLY on the 7 round mag. So combine the super tight brand new springs and maybe a mag catch thats a hair too small and you get a disconnect as soon as the first round is fired. The only reason I find that to be the most acceptable answer is because as I said, we have put over 1000 rounds through this gun, probably closer to 1300-1400 at this point and we can no longer replicate the problem. I have not sent it out to S&W yet because I do love this thing. I love carrying this pistol and i’m not going to lie, I rolled with the smaller mag and one in the pipe. The magazine I did not trust as much I left at 7 rounds and let it sit like that until I was ready to try it again. There are several things I do not like about the 7 round magazine, but that issue was the most prevalent.

Overall, this is a Conceal Carry pistol. It is going to have a heavier pull. It will NOT be crisp or clean although it is clean(er) than almost all we have tried. This is not a pistol to go “have fun” at the range with (although most can). This is a pistol that is supposed to stay well hidden, easy to use, hard to accidentally discharge, be easy to aim instinctively and purposefully, and most of all have the reliability to save your life. If you take all that into consideration and then size up a review on this gun, Like I said, I still carry this piece. Everything I own is a 4” barrel or bigger with the exception of a couple, and even with the mag issue, I would rather carry the M&P SHIELD 40 than my other options. It is slim, it is light. The Misses can fire it if need be and I can reload it faster than a revolver (did I mention it’s slim).

When it’s all said and done, a properly maintained conceal carry weapon no matter what your choice is should be something you are proficient with, trust completely and can conceal reasonably. If you are purchasing a weapon like this for the first time, I still recommend the SHIELD, but would implore you to try others as well before you buy. I like the SHIELD 40 and continue to use it