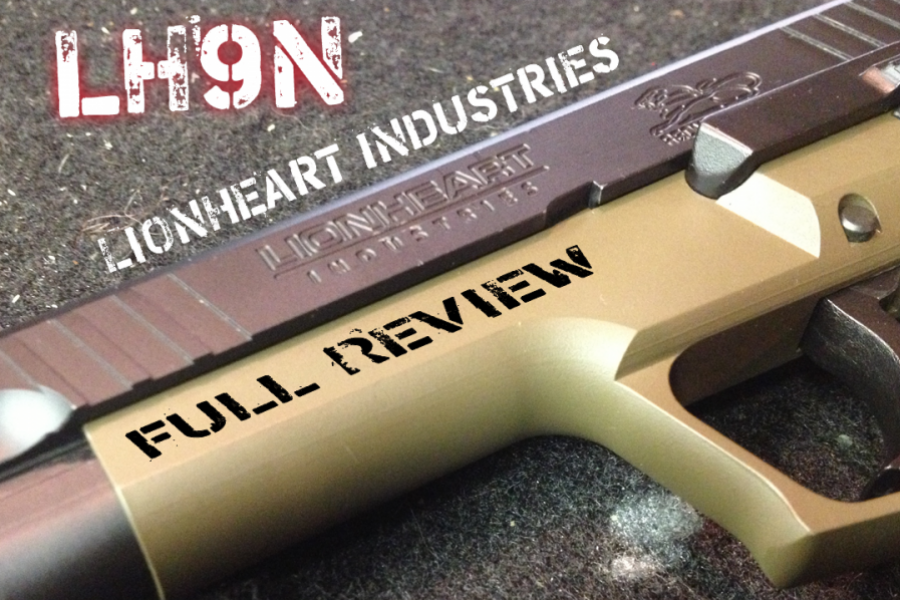 This pistol was first brought to my attention through a link sent to me by Superbowl. The pistol was in it’s final testing/QA phases at the time. Lionheart was releasing tidbits of info through social media outlets about the crazy testing that they put the LH9 through. And I immediately wanted to have one.

I’m the least knowledgable about recent gun history out of the four of us, so when one of the guys told me about the origins of the pistol, I was intrigued and started reading up on it before getting my hands on one.

Lionheart Industries is a relatively new company to the firearms industry. The company formed in 2011 in Redmond Washington. After teaming up with S&T Motiv Co., Ltd (formerly S&T Daewoo and previously Daewoo Precision Industries), a South Korean manufacturer, to co-design and manufacture the LH Series, they worked on the design and product testing for over a year.

The LH series was introduced at SHOT 2013. There was quite a buzz online about Lionheart right after SHOT. Lionheart has a great group of people working there, and we were able to secure an LH9 for testing. We had originally received the standard base model LH9 back in March. Check out our first impressions of the LH9. Lionheart then sent us an upgraded model that they had come out with called the LH9N. Which features a duo-tone Cerakote finish (available in two colors) and Novak sights.

Since receiving this pistol, I’ve put close to 800 rounds through it. One of the days at the range, I had to wait about 20 minutes for the pistol to cool enough to put back in my range bag because it was a wee bit warm, and had started to melt the nylon on my bag. That day we probably put 500 rounds through it in under an hour. Which is quite a bit for a pistol, and especially when you have only two mags… but it’s proof of how much fun it is to shoot.

At its core, the LH9 is essentially a newer, redesigned version of the Daewoo K5, the South Korean army standard issue sidearm. The civilian version of the K5, the DP51, was imported to the US until the mid 1990’s by Century Arms. After 1999 they were no longer being imported, due to the re-organization of the Daewoo corporation. Read more history on the K5 pistol. There’s scores of people online who express their love of the DP51, and its reputation for reliability was pretty evident once I started looking into the history of this design.

With the LH series pistol, Lionheart Industries took a solid, proven platform from the 80s and 90s, made changes that are both bold, and subtle, and in my opinion, made a great pistol and new 9mm platform.

It has many changes/enhancements over the older military pistol that it’s based on. The sights are improved, the grip texture (which is outstanding) has changed, and the slide serrations are more aggressive. They also make a model, the LH9N MKII, which comes with a 1913 rail on the front.

The LH series’ tolerances in its design and manufacturing are one of the first things that amazed me when first picking up this pistol. It feels amazingly solid with little to no play in any of the parts. It’s lines are clean, and not over emphasized. It’s ergonomics were very well thought through resulting in easy to use, simple controls. They even took the time to redesign the hammer so that it was easier to use and created a more comfortable carry pistol.

The LH series also was the first pistol to ship from the factory pre-treated with FrogLube. Check out our year long journey with FrogLube to see why we think that this is a feature worth noting. It’s really nice to just be able to buy a pistol, and bring it right to the range without having to clean out the heavy layer of factory grease that some manufacturers load their products up with for shipping.

A couple other things to note show the attention to detail and the thought that went into the LH series. First is the packaging. The pistol comes with a gorgeous nylon bag that is loaded with goodness. I cover the details of what’s included in the video below. But a few things to point out about it is that it’s made of 1,000 denier cordura ballistic nylon. Has an embroidered velcro patch on the front, and contains standard items such as a trigger lock and a manual. Not so standard features includes 5 elastic loops for magazines, a small tube of frog lube, and a bore brush w/ cleaning rod.

Lionheart’s level of detail is clearly evident with the design of this bag. And even more so in the design of their manual for the LH series. The manual is a fold open style brochure highlighting all the controls and takedown of the weapon, including a list of all the parts contained and some standard operating procedures. It also features something that I’d never seen before on a gun manual; QR Codes on each section that link back to their site, with more detail and videos about each section.

The main selling points for me on the LH9 are comfort, safety and style. It’s hands down one of, if not the most comfortable pistol I have ever shot or had in my hands. There was one issue with the controls where the slide release lever is a bit large and causes the action to not remain locked back when the magazine is empty, but it’s more my grip ergonomics and my hand size that is causing the issue than the design. The Double Action PLUS+ system that this pistol has (explained fully in the video) is also a great feature that is unique to this pistol. Essentially it allows you to have a single action trigger pull with the hammer in double action position. For me, this was a great feature with regards to carrying concealed IWB because the hammer wasn’t digging into my side when sitting in my vehicle. There’s also an ambidextrous safety. While I did find it difficult to engage the safety without moving my grip, dis-engaging it was extremely easy and comfortable.

Some of the weapons specifications are below. Please check out the video for some more detail on the LH9 and send me any questions at lou@fourguysguns.com.