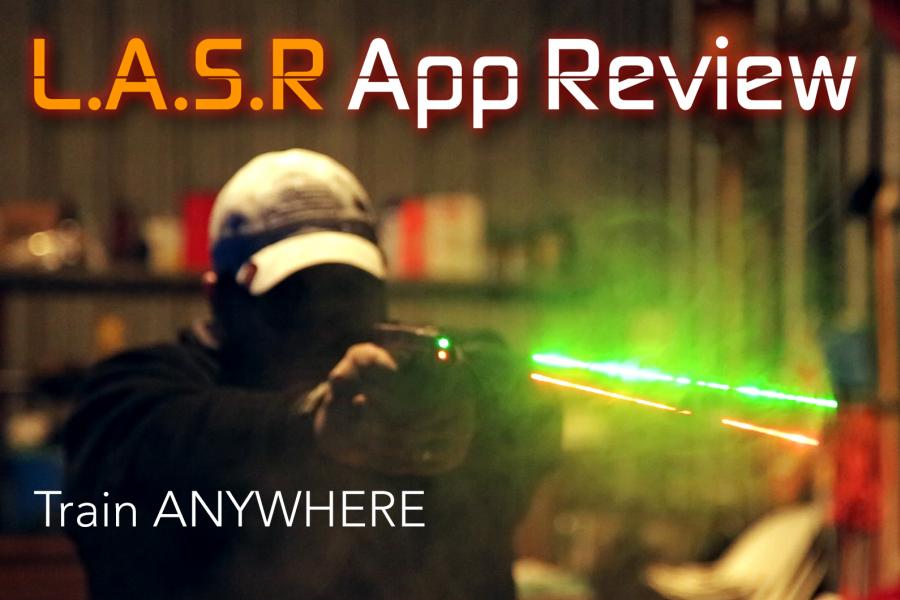 The L.A.S.R. was a much superior offering to previously tested products from other companies. Furthermore it works with another product we absolutely love and use personally several times per week, the SIRT Pistol from NextLevel Training. When you combine good hardware and good software the positives of the L.A.S.R. system far outweighs the negatives.

The L.A.S.R. system utilizes a webcam, just about any webcam that was made in the past decade combined the L.A.S.R. software and any laser emitting device like a SIRT pistol or Bolt. Inexpensive alternatives work as well, but the best we have seen and reviewed has been the NextLevel Training products. What this software does is uses your Windows laptop and webcam to help you map out “targets” on the wall or “range.”

Why the quotation marks? Well because your “Range” can literally be just about anywhere you can set this system up which gives it so many possibilities for convenience and flexibility for targets and target types. And by “targets” we mean anything, seriously anything you would aim at. For instance in my office there is a series of hooks holding hats on the wall, a couple patch panels and a RE Factor “Essentials” target on the back of the door. Randomly throughout the day and during conference calls (thank you mute button) I will grab my SIRT Pistol, shoot the hats in a specific round count, transition to the patch panel and then 180 to the target on the door. These random items can all be defined “target” areas via the software.

Anyone can use a mouse and draw a circle or square and thats all you have to do. You can use actual targets like the VTAC, use steel, wall clocks, post-it notes, books on the shelf. ANYTHING. All you have to do is select it in the software that the webcam is looking at and tell it to be a target. It is that easy. You can also specify round counts, magazine counts, keep track of shot timing, reload split times and even get diagnostics on your shooting to see if you are on the trigger too long, jerking, slapping etc. It’s truly an awesome and super easy to use training tool.

We tried the L.A.S.R. system under normal household lighting conditions as well as outdoor and failing light. The ability for the software to recognize some target areas will definitely be impacted by lighting, however we found with the webcam we were using that just by moving the camera closer we were able to alleviate all issues of contrast and target recognition by the software. Most of the systems we have tried have had issues with registering the speed of follow up shots. Mind you we are no KC Eusebio or Brandon Wright type speed shooters, but things like not registering 2 of 5 hits from one of us is noticeable as we are not paid competition shooters. The L.A.S.R. software actually kept up pretty good in the failing light and was great in normal household lighting conditions and “dropping shots” was at its worst a 1 in 20 occurrence. Similar issues with low light though but that is a matter of lighting/contrast and the webcam you are using. So not impervious to issues, but easily remedied issues that are environment based. Add more light, invert targets, whatever need be if you have to shoot in low light, the system will still work.

The only perceived problem we had during testing was getting used to the audio queues. It was a little disorienting and at time felt like you were a gerbil, wait for the correct sound to receive your feed pellet. Let’s be honest though, you, me anyone shooting will not get better if they are trying to practice shooting while looking at a computer screen. So with that the audio queues are a necessary device. After using the system for a few short hours it becomes similar to a trendy song in your head and you know all the words. So the biggest “negative” of the L.A.S.R. system is easily overcome with steady repetitions. I do not believe this is detrimental to live fire as you can visually see targets and see steel react in real life versus working with an audible system in computer software. Besides, for all you “train like you fight” die-hards out there… if that was true then paper targets are also against your beliefs since threats are seldom made of paper.

As a whole, the software is easy to install, its easy to use, intuitive to control and can be used in a wide variety of drills. If your targets are fixed, camera is fixed as well as laptop not moving, this means you can do (room provided) anything from sitting at your office desk, on your couch or even vehicle work in your garage. Truly a neat system where the only limitations are pure darkness and your imagination. The only thing that would make this better was if it had an iOS app to work with the iPhone or iPad. THAT would be amazing and as flexible as it gets. Alas a boy can dream.

Check them out over at lasrapp.com, watch the video to see it in action.