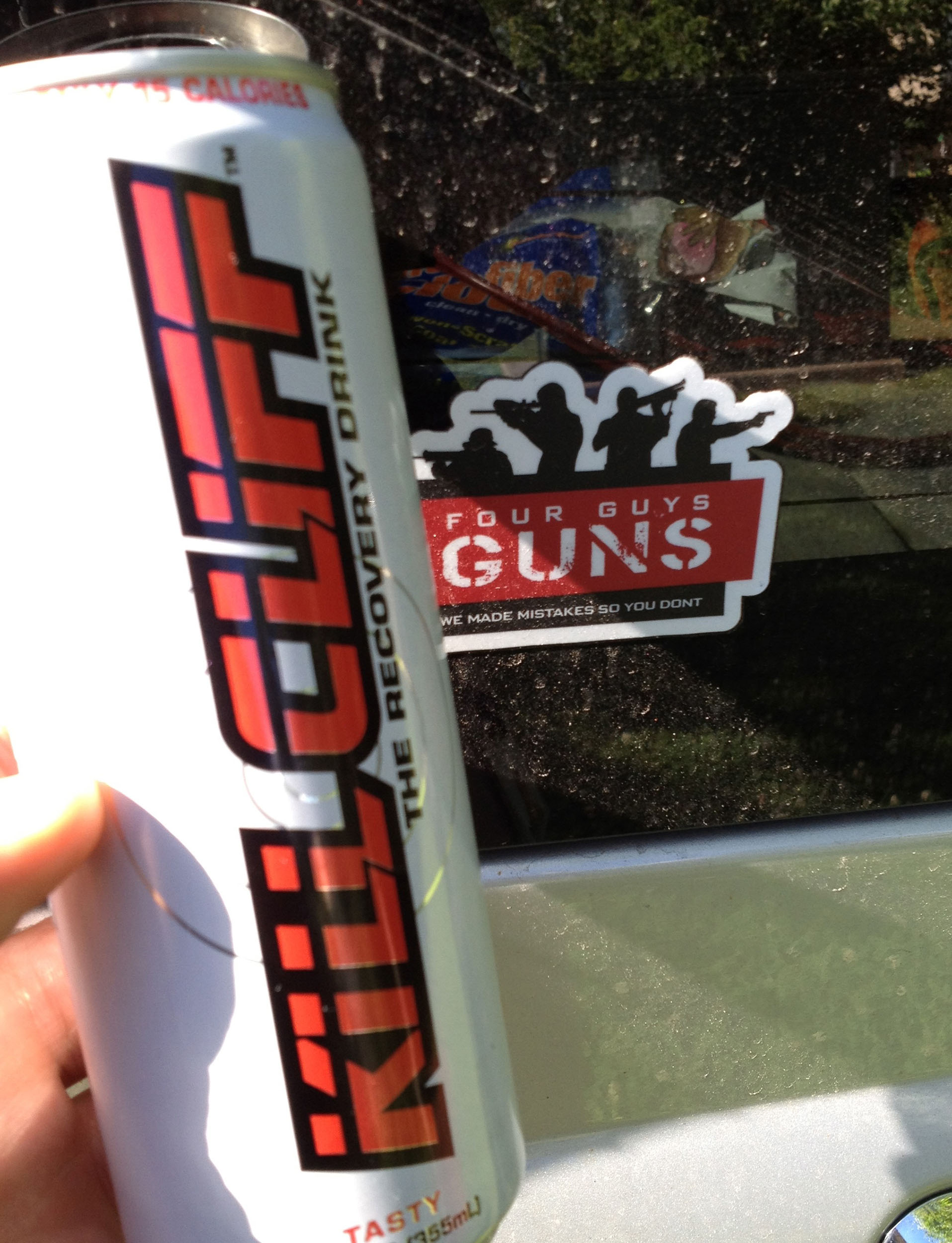 This is not what you think it is. You may have seen cool LOL pics from them, you may have seen some awesomely in shape guys and gals rocking this beverage after running a 30k marathon while simultaneously carrying 3 friends on their back while juggling sledgehammers.

Maybe your favorite firearms instructor or two partake in the nectar as they dump 300 rounds into 3 targets in 6 seconds (all headshots) with no reloads.You may have wondered, “How Do I Test Positive for Awesome?”.

It’s called KillCliff. And it is in fact, awesome.

The appearance is deceiving. If it looks like an energy drink, promises to (help) make you (more) awesome(r), and you see people doing awesome things while holding/drinking/being awesome, it must be an energy drink right? Wrong. It is a RECOVERY drink.

Yes you heard me, a recovery drink. It doesn’t jolt you into a sugary carbonated Taurine flavored caffeine addled 3000% daily value of B vitamins state of alertness and energy. It helps you actually recover from whatever you just destroyed your body doing or prepare your body/mind for whatever you are about to do.

Whether you are training, losing weight, drinking heavy, recovering from drinking heavy or you just need a tasty beverage to prepare for your work out or a day of awesomeness, this is what KillCliff is made for. So, with a case at the ready and a mission to “test” some ideas conjured by their FAQ page and my over exaggeration, I set out to see what KillCliff was all about. Here are my “Scientific” findings.

Made my usual coffee, usually 2-3 cups of a dark roast, today…KillCliff. Today is going to be awesome. Successfully shouldered and played helicopter with my 35 lb. 3 year old while flipping eggs with no spatula. Beginnings of an awesome day. Still had a cup of coffee but only one was needed. The blood orange flavor is in fact tasty.

Peripheral vision and horrible Massachusetts’ driver anticipation was off the charts. Lane changes and merges we smooth and Jedi-like. You would think I drove professionally if you were on a ride-along. No stress smooth sailing on the way to the range.

Let’s put KillCliff to the test. One can as I load magazines and we are ready to rock and roll. I successfully did a sideways dual wielding dive while emptying both magazines in slow motion a-la John Wu. Not only were all 24 rounds on target, but dove’s flew out magically on cue in the background. It was awesome.

Instead of redacting 8 paragraphs of details as this is a family friendly site, let’s just say Misses Whitey would like a lifetime supply of KillCliff shipped out immediately. Let us also say… I didn’t tap out first 😉

Successfully mixed a half bottle of Belvedere Vodka with 2 cans of KillCliff. I wasn’t too concerned with “performance” at that point, I was in it to win it. It’s not “drinking alone” if it’s research right? Went to bed after a day of awesomeness and as drunk as Lindsey Lohan (without all the driving). I call it “Killvedere”

Same 3 year old, 6 a.m. wake up call. Usually, we defer to Misses Whitey but I popped out of bed (not alert and awake mind you, just more mentally functional than I usually am). One more KillCliff as I make his milk and cereal to rock out to Little Einsteins. No hangover, no grogginess, ready to start a normal day.

Much of this has been very tongue in cheek. I wanted to have fun with this one because this product is one of the cool things I have gotten to review that will not kill someone if done improperly. KillCliff is in fact a tasty alternative to energy drinks that has benefits for your mind and body. they are growing like wildfire because it is really good and actually good for you and your body. It actually makes other drinks in similar sized cans (and larger ones too) seem harsh and excessive. I really liked the Blood Orange flavor as did all four of the Four Guys. Misses whitey actually really liked it a lot and we found ourselves fighting over who gets the last can.

Simple things I didn’t normally notice like my knees seemed pain free and lubricated. I wasn’t craving more caffeine by comparison to the normal levels I intake and I generally felt…good. I never felt like I needed another can or twelve to accomplish anything one can couldn’t handle. If you like “energy” drinks and you have your favorite 40mm can of “pick me up” and actually desire more from a beverage without the shock and awe, I encourage you to try KillCliff as an alternative or replacement. It is becoming more and more available, you can order it from their site, it is competitively priced and is just overall a great product. Especially if you beat your body or brain up, either by being awesome, or just by being everyday you. I’m no doctor or workout buff, but me, the guys and the wife all agree, we need more KillCliff.

(No doves were harmed in the fictional cinematic scene. I did however shoot very well that day with the pistol and shotgun exceptionally early in the morning.)