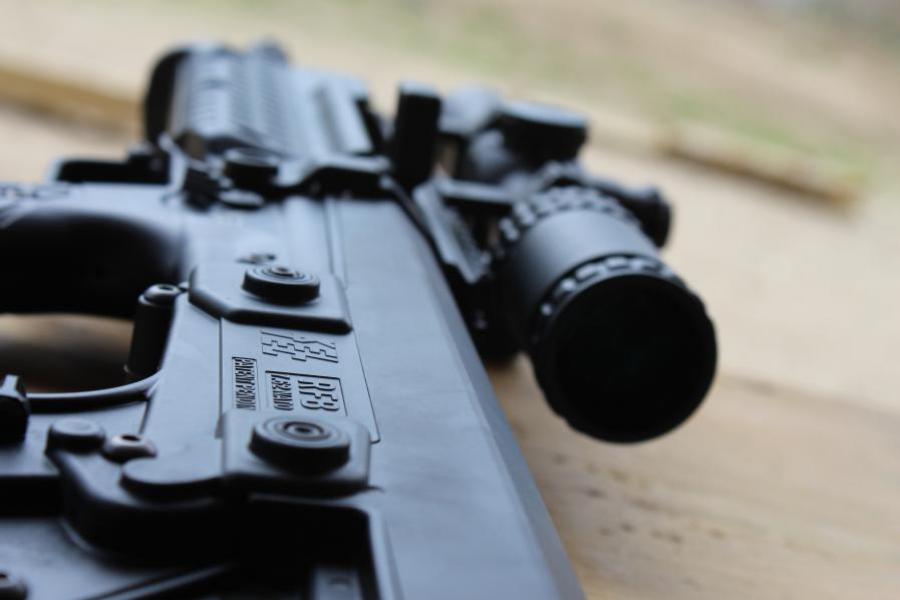 Every gun has its purpose, a concept developed into the reason for which it was created. The purpose can be long range concealed shooting, close quarter combat, rapid fire for intimidation or accuracy.

RFB stands for Rifle, Forward-ejecting Bullpup. It gets its name from the most unique feature about it, the spent casings eject just over the barrel offset to the right when looking down the barrel. The casings do not eject with any force, they are fed down a ramp and fall out with gravity or the force of the shells behind it. This rifle is different in that it is using a shell ejection system that has not been seen in a rifle before and touts that in a very compact bullpup platform.

This rifle is tiny for a .308, with a total length of 26 inches. This is roughly two inches longer than a standard .308 barrel without a rifle attached to it. This can be ordered in the hunter configuration with a 24-inch barrel or the one we are reviewing with an 18-inch barrel. KelTec makes a claim that the 18-inch has a functional range of 600 meters whereas the 24-inch version has 1200 meters. The overall weight of the rifle is 8.1 pounds without a magazine.

The controls of this rifle are snappy. The safety has an unmistakable click when switched from one setting to the other. The trigger is identical to the KelTec KSG that breaks like glass with what feels to be a 6-7 lb. break. The magazine release and action release are intuitively located and are not in a place where they would accidentally be pushed under any conditions.

All around, this rifle screams close quarter combat to me and out of the box I think that this is a great solution for engagements within 300 meters. I cannot verify how it handles out to 600 meters but we will go over that more in depth a little later.

Things you should know

We have had this rifle for a long time and there were a lot of high points to it mixed in with some things I can’t really place as a pro or a con. It is a short stroke piston rifle, the piston takes excess gas and moves about 1 inch with enough velocity to push the bolt back the length of a .308 bullet. The piston system requires adjustment out of the box and every time you switch your bullet weight or ammunition type it takes a little tweaking with a few clicks in one direction or the other.

Accuracy was the one pain point I discovered with this rifle and in order to review what people would essentially find out of the box we didn’t use a bi-pod or any additional accessories. When shooting the RFB there is one sacrifice made in creating a .308 with such a short overall length: the rifle is so small and compact that even resting the rifle to shoot it is difficult. We were able to reliably shoot a 3-inch group with it at 100 meters – which is nothing to write home about but given the challenge of shooting it from a rest was most likely operator error.

The last downfall of the RFB that I can see with the 18-inch and 24-inch is the ability to put a larger sized optic on it. The rifle itself is so small that putting anything over a 10-12 power scope increases the size to half that of the rifle. A minor gripe and an obvious one, but something worth a mention. We initially put a 24x scope on it which ended up making it look like something straight out of Call of Duty. The major limitation this creates is finding an optic with the correct eye relief. The rail segment for mounting the optic is far forward, so you really need to find an optic that lets you put your eye anywhere in order to make it effective from standing and prone shooting positions.

Outside of the above statements, there really isn’t that much I would be concerned about with the RFB. The piston system works flawlessly after adjustment, the accuracy is really dictated by the shooter’s experience and all in all it is a great rifle with a lot of interesting concepts integrated into one bad-ass looking rifle.