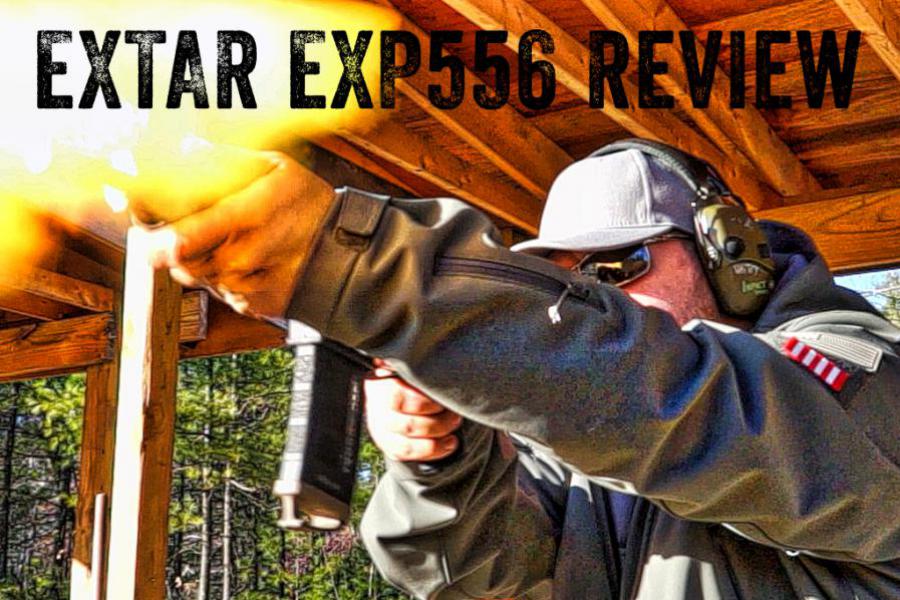 Less than 3 lbs. unloaded, 18 inches of overall length, and many features that offer ease of use and management of recoil. Despite it’s all polymer construction and lack of a buffer tube, the EXP556 is remarkably easy on the shooter and quite literally a blast to shoot.

This AR pistol has a lot of features that are usually items we add as aftermarket parts to many of our own AR’s. These features are also added for functionality and purpose which help make this pistol a great package for a fun time at the range. The EXTAR is a perfect reason to horde ammo as the boom and muzzle flash of every shot is a head turner at the range every time you pull the trigger. Equipped with an effective muzzle device, a winter trigger guard (especially useful up here in the northeast) as well as an ergonomic grip and accented hand guard, you definitely feel like you’re holding a space gun.

The hand guard is not a standard M16/AR15 type hand guard, and seems to accentuate the ribs drastically to help aid in the grip of the weapon. The AR Pistol platform is a bit different to hold and manipulate than both a pistol or an AR and with that comes with some mechanics that may look or feel weird, so having good grips and controls are important. The actual grip itself is a rubber type texture and is reminiscent of a US Palm grip in shape. Very comfortable and gives a very positive grip on the pistol combined with the hand guard help keep the EXTAR on target.

When shooting an AR Pistol there are a few ways to hold it. Usually you will see the buffer tube against the shoulder or armpit for support with the support hand using a mag-well grip. Another way to hold an AR Pistol is forward thrust in a modern isosceles type hold but with less rigidity and more similar to a hold or grip you would use with an AR in the Supine position. The most uncommon I have seen is the standard pistol type hold where you have both hands wrapped around the grip like a pistol. Without the buffer tube and combined with the reduced recoil of the EXTAR however the pistol type grip works amazingly well. The pistol grip and the isosceles stance seem to be the most effective methods of shooting the EXTAR with the lack of a buffer tube to use as a third point of contact. You can even shoot it one handed with ease, but if accuracy is your game you need to have a gorilla grip strength to compensate the muzzle movement…downward.

Working with a reciprocating side charger is also a bit different than most are used to but feels a lot more natural on the EXTAR than a standard rear charging handle most AR Pistols use. By utilizing a side charger, coupled with how the recoil spring is used, much of the recoil is balanced and kept within the actual pistol and frame and not thrust backwards onto the shooter like you usually get from a buffer cycling. The spring works really well and we only had one failure to feed from short stroking.

The only downsides to the side charger are the actual mechanics being slightly different than most are used to as well as the initial thumb whack that teaches you instantly how to not hold the gun. The EXP556 comes with a black, steel USGI mag and gave zero issues. PMAGS however worked fine except when loaded to max capacity on a closed bolt. That can be said for a lot of different rifles and pistols in the AR family so nowhere near a deal breaker for me. We mainly test brass 5.56 in our reviews but we did have a request to make sure it shot steel. We shot a lot of XM855 as well as some Golden Bear steel and had zero problems feeding, extracting or shooting. We did not test more than 100 rounds of steel so any “laquer problems” were not evident.

Overall the EXTAR EXP556 is a lot of fun at the range. It makes a great addition to the collection and is wonderful departure from the standard weapons we tend to test and review most frequently. A rifle caliber in this compact size has uses out there in the real world and can be used for more than just fun time. Certain parts of our country would use this as a truck gun, some people would use this as a trail gun, maybe even a good bug out bag gun. The EXTAR is super light, compact and easy to maintain. With an MSRP of $450 is not out of reach for anyone to have some happy fun time at the range.