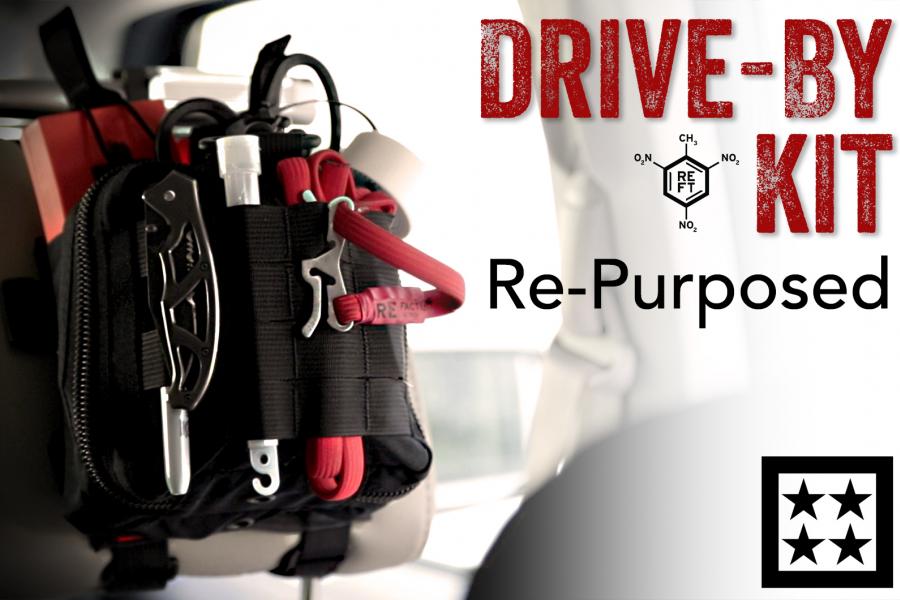 RE Factor Tactical creates products based off a need by guys out there, in the field and overseas doing the kinds of things movies are made of. Putting the hurt on bad guys in places and on missions you will never hear about. The product we are focusing on today was created for a completely different purpose than what I used it for, but that also does not negate the quality and usefulness of the product in a civilian capacity.

The RE Factor Tactical Drive-By Kit was created for the purpose of engaging an enemy or threat from a motor vehicle in an easy access capacity without having to go to your load out on your gear. If you expend all the stuff you need that is on you from inside the vehicle and you need to hop out and move on foot… you are now at a reload/supply disadvantage. While that all sounds badass and awesome, it is hard for me to justify needing this product as a father and husband in my day to day civilian life. So how is this even a review? Well, technically it’s not, however I will share my results on how I “re-purposed” this fast deploying kit to suit my needs.

Let’s flash back to why I took this route before we come back to the present. On April 15, 2016 I was driving down the highway on normal, mundane day to day task in the middle of the day. As I was cruising down the highway I was caught off guard by an immediate occurrence of dead stop traffic. Like everyone “brake checked” everyone southbound at once. As I began rolling forward I could see what happened, sort of. Several vehicles on the Northbound side were in utter chaos. Crushed, on their sides, debris and car parts all over the highway with a couple on the jersey barrier. As I came upon it I started processing what the situation was and I could see a girl either in shock or terror on my side of the highway over the jersey barrier crying and bleeding. I am no first responder but with a quick glance, there were no first responders. I immediately thought “I should help” and I started positioning my vehicle to stop and protect the girl from on coming and try to offer assistance. As I was putting hazards on, waving out the window and getting over to the side, I took a quick medical inventory in the vehicle. Only to realize I had NOTHING of use. Literally, nothing but a pocket knife, Flashlight and a pistol.

There was nothing I could do that would help the situation at all and I would have put myself, my vehicle and others in danger. So there is the pit in the stomach, there is nothing I could do to help, and that bothered me greatly as I moved literally and figuratively back into my lane. Luckily as I was passing the girl on the road, Police were pulling up with Fire and EMT’s. I felt a little better but immediately came to the realization that this is an unacceptable situation moving forward. As it turns out, there was a carjacking that led to a car chase into MA, followed by another carjacking and stabbing before leading authorities on another car chase back into NH. I had just stumbled across the tail end of that debacle during normal, everyday, boring tasks.

So, as luck would have it, RE Factor had just released this new Drive-By Kit. The Drive-By kit consists of a semi rigid molle panel that attaches to a headrest. Utilizing a stiffened and open ended nylon pull, it weaves to a pouch that is a tidy little package. The pouch itself has two AR-15 magazine slots, molle front and rear, compartmentalized nylon lined on one interior side and an elastic banded flex use side on the other interior panel. The pack also has a quickly employable hook on it so when you do need to pull the red strap and be mobile in literally a second, you have a method to attach it without stopping and trying to thread molle. Very versatile and fast I instantly had an idea to create a roadside immediate action/driving utility pouch.

Now, bear in mind, it’s a great idea to carry a medical kit/first aid kit in your vehicle. Especially as a father, a traveller, a pet owner, a responsible conceal carry holder (shame on me) there should be a kit in the car. And I had one, but it was for bumps, and scrapes and not capable for that particular day or event. Furthermore, it was in the trunk, underneath bags, ammo, steel targets and a stroller. not very “immediate.” So with that event very fresh in my mind I started laying out all the IFAKs and medkits I have on my range gear and figuring out what I would want/need in a situation like that. I also factored in, what would I need if myself or the wife was driving, to help the kids in the backseat without having to stop, unpack a trunk to get at a kit or gear to help remedy the situation. So with that, here is what I packed in a fairly organized list and why.

This utilizes one of the mag pouches on the kit to hold some bandages, tips and smaller items that the wife and kids can access without digging out the big kit in the back.

This goes in the second magazine pouch and is held in place by the bungee system on both mag carriers. I also crammed a chemlight in there and on the exterior molle as well. Many uses including illumination and occupying children.

On the exterior of the main pouch I threaded a RATs tourniquets for fast deployment. The RATS is good for not just being another tourniquet to use, but it also works much easier on smaller people like the kids as well as the dog. The CAT just doesn’t do that as well or in a hurry.

Strapped to the molle panel straps that hold the panel to the headrest is a 1000 lumen LED light from Work n’ Gear that has a high, low and red strobe setting and a magnetic base. Perfect for flat tire, roadside repairs and signaling. Also a utility/pocket knife on the outside molle.

So, I am happy with this setup but also not sold entirely on it. Hopefully I outlined the intended purpose of being able to get gear out and “at the scene” fast coupled with items needed for family on hand immediately/conveniently. I am also working on a well built trunk kit that will have more of a “we are going to be here awhile” setup. Hopefully this is a good start to immediate access in seconds. Please feel free to leave comments on Facebook or Youtube or even email us. I would love to get some feedback, opinions and ideas from our fans and followers!

Check them out at https://www.refactortactical.com/