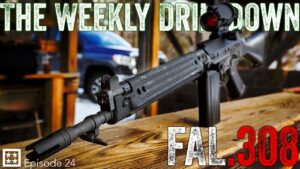 It’s a little cold for Rhodesian booty shorts and high wool socks… but that doesn’t mean we can’t have some fun with the FAL! This .308 is a favorite of many beyond the cold war from NATO troops to Somali Pirates. Smooth cycling and huge power make it a favorite. This week on The Weekly Drilldown, Matt ties it up with a cheater gun and the 4 of Diamonds. 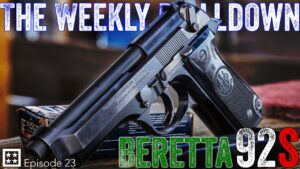 Shooting a Retiree from Concealment – Loser shoots the 92S – The Weekly Drilldown Ep. 23

No, we aren’t shooting senior citizens, but in fact the recently retired Beretta 92. The U.S. Army has finally moved away from the Beretta 92 and onto the Sig Sauer P320, so with that… now the title makes sense. This pistol however, is the Italian 92 S configuration complete with European magazine release. Annoying. This week is the 3 of clubs and by popular demand we are shooting this week’s drill from concealment! 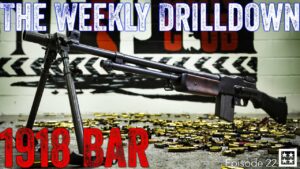 If you didn’t catch our LIVE TWDD then here is the amazing (more polished) Weekly Drilldown from SHOTshow, LIVE in Las Vegas! Strip Gun Club was an AMAZING host and it only got better as Agency Arms brought in their never shown before M&P 9. The icing on the cake though is the 1918 BAR for the loser in its full masculine 30-06 caliber full auto package. It was a good day kids, a good day indeed. 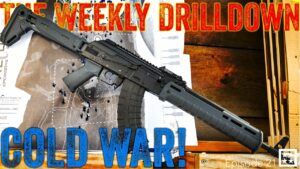 Is the 1971 Colt SP1 better than the Izhmash AK47??? No Clickbait here though as we have a special edition Cold War Battle on this week’s episode. AR-15 versus the AK-47!! 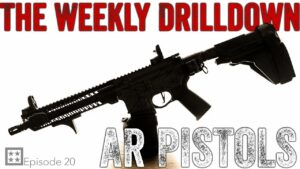 Fan Requested, TWDD abides…. The Weekly Drilldown Whitey and Matt will go head to head with AR-Pistols. Target and tempo drill from the Dead Mans Hand Deck. Another installment in freezing cold temperatures and weather, make sure you don’t nerf the drill while keeping the Sig Brace OFF your shoulder! 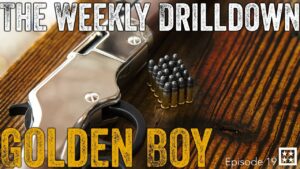 Do You Even Lever Action? The Weekly Drilldown Ep 19

Freezing cold did not stop the onslaught of hiccups in our normal routine. We did have some blunders though and had a couple “Mulligans.” Loser Rifle is the Henry Repeating Arms Golden Boy Silver… not to shabby as this is a classic rifle that is a blast to shoot. 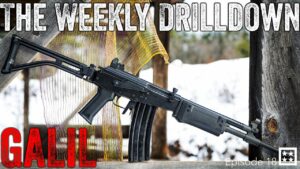 Ringing in the Christmas holiday we break out the Israeli Galil. To make matters worse, it doesn’t help that Matt and Whitey can’t seem to ever count correctly or comprehend reading either. I would have liked to have seen those times. Pretty quick turn and shoot with the Jack of Hearts… who is going to take the W this week? 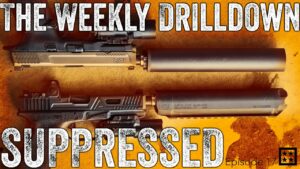 Adding Silencer/Suppressor to a pistol changes a lot of things…. the weight on the muzzle, the balance, even your sight picture. This week we do the 2 of Spades drill with the Matt’s SilencerCo Octane .45 and Whitey’s Alpha Dog Silencers 9mm. Loser has to shoot the winner’s pistol un suppressed. 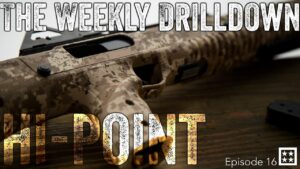 You asked and we listened, Revolvers it is. Chambered in .357 magnum Matt and Whitey take to the 4 of Spades drill with two different revolvers and +P loads. Matt’s Ruger Security six snub nose versus Whitey’s Ruger GP100 6″ Stainless. 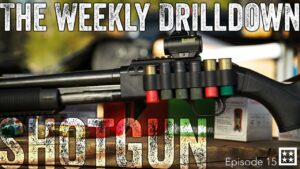 Wild Card means Shotgun time. And to make it more interesting we moved it from the 7 yard line back to the 15y mark AND used rifled slugs! New Drill, New Distance and some Long guns we haven’t used on the show before. To add more spice, neither of us knew what shotgun the other was bringing. Both Mossberg’s but one Pump and one Semi Auto. Definitely Interesting. 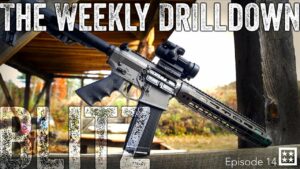 10 of Diamonds. Simple enough right? Put one round into a target, 5 rounds into a target and then 1 in one more to wrap it up right? Wrong. Matt from DRFTraining wins because Whitey can’t math so good. Mixing target transition with letters, numbers, shapes and round count definitely tripped the loser up. 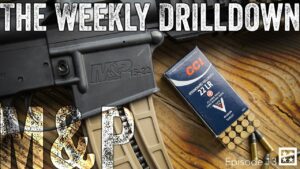 on target identification and transition. We run all these drills at 7m regardless of rifle or pistol for those of you that want to try and replicate. 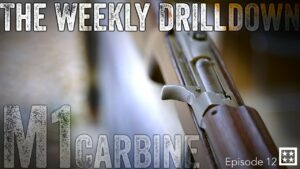 This week on The Weekly Drilldown, loser gets the M1A Carbine! This week we do the 3 of Diamonds from the DeadMans Hand deck. A simple drill, but balancing speed and precision is the hard part while maintaining your offsets as we run the drill with the rifle. Red cards are always rifle drills and since matt forgot his offsets and Whitey threw two shots, we went back and forth a bit to see who could really push the accuracy and the speed. 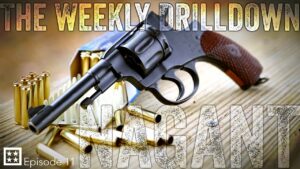 The Weekly Drilldown Ep 11 with a Nagant Pistol?!?

This week on The Weekly Drilldown, loser gets the Nagant Pistol! We take on the 7 of Clubs this week and the competition is getting serious! Mixing training and fun is possible and we learn more about our abilities and shooting every week 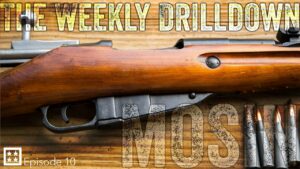 The Weekly Drilldown, where people like Matt Devito from Downrange Firearms Training make people like Whitey from FourGuysGuns shoot the loser round with a Mosin Nagant. Unbelievable as we run the 7 of Diamonds Drill with the Dead Man’s Hand from RE Factor Tactical and the IQ Targets 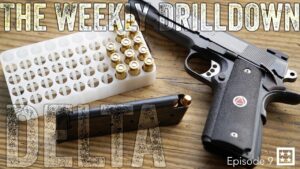 Back from last week’s IV8888 we pick up where we left off, BUT we are going to try including all guns from one drill in the same episode. We heard you loud and clear. This week is th 8 of Spades drill and it was quite different. Non linear target transitions at 7yds. definitely shook loose some fliers on us. 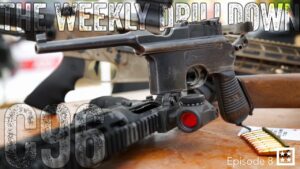 After a short travel stint Matt and Whitey are back at it in Georgia with the IV8888 crew at their Annual YouTube Event. Eric and Chad helped made it all possible to try and bring you guys some new blood into the mix. The shooting gods were on Matt’s side (or against Whitey however you may look at it) and Matt won the 5 of Hearts drill with the RE Factor Tactical Deadmans hand and IQ targets. Being the gracious host he is, Eric volunteered to “be the loser” this week and brought out his Astra C96 Broomhandle. Not very “loser-like” since this is a classic gentleman’s pistol. At least it looked that way.

The Weekly Drilldown is a weekly offering from FourGuysGuns showcasing shooting drills in a friendly and fun manner outside of normal “bullseye” type regiment most of us go through. Featuring Whitey and DRFT Owner Matt Devito we utilize RE Factor Tactical’s IQ Cards and IQ Targets to face off each week… Loser has to shoot the drill with the weapon of the winner’s choosing hehe. 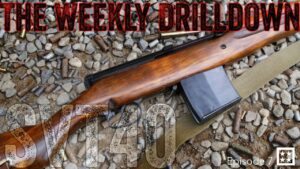 Whitey lost last week so he has to run the Jack of Diamonds Drill with an SVT40 chambered in 7.62x54R. The definition of a LONG gun. This week is the 6 of Hearts which incorporates a lot of movement and at 7 yards with a rifle, you have to remember those offsets!

The Weekly Drilldown is a weekly offering from FourGuysGuns showcasing shooting drills in a friendly and fun manner outside of normal “bullseye” type regiment most of us go through. Featuring Whitey and DRFT Owner Matt Devito we utilize RE Factor Tactical’s IQ Cards and IQ Targets to face off each week… Loser has to shoot the drill with the weapon of the winner’s choosing hehe. 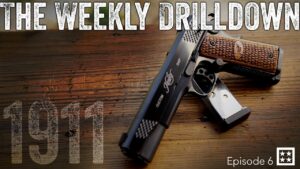 Matt gets to shoot another weapon he hates… the 1911 in .45
The Weekly Drilldown is a weekly offering from FourGuysGuns showcasing shooting drills in a friendly and fun manner outside of normal “bullseye” type regiment most of us go through. Featuring Whitey and DRFT Owner Matt Devito we utilize RE Factor Tactical’s IQ Cards and IQ Targets to face off each week… Loser has to shoot the drill with the weapon of the winner’s choosing hehe. 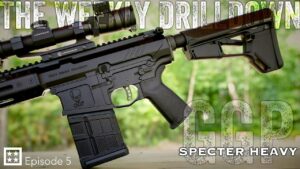 This week, Whitey has to shoot last week’s drill with the Grey Ghost Precision Specter Heavy. The Weekly Drilldown is a weekly offering from FourGuysGuns showcasing shooting drills in a friendly and fun manner outside of normal “bullseye” type regiment most of us go through. Featuring Whitey and DRFT Owner Matt Devito we utilize RE Factor Tactical’s IQ Cards and IQ Targets to face off each week… Loser has to shoot the drill with the weapon of the winner’s choosing hehe.