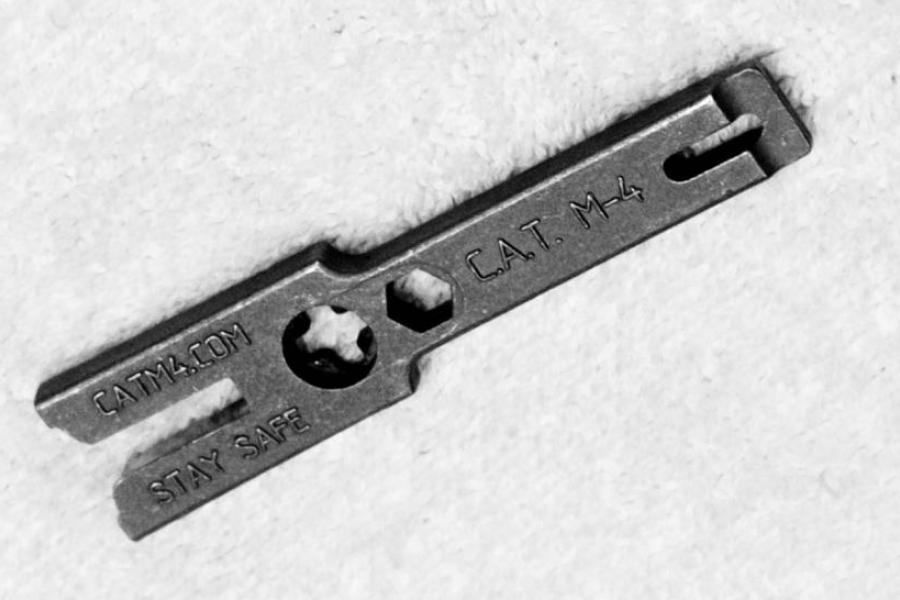 When Whitey called and asked me to do a review on a new product that we just got; I figured that it was my attention to detail that he liked. When I asked what it was… he said, “Oh I’ll show it to you, I was intrigued.”

I would never use anything else to clean my bolt again. The ability for this small three and a half inch tool to clean the bolt and bolt carrier as effectively as it does is very impressive.

So the other guys might say that I am a bit particular about cleaning even that I am OCD. Well Mrs. Monkey gave me a T-shirt that says that I am really just CDO, because all of the letters are in the correct order; I like that better anyway. So when it comes to firearms I think that about sums it up as well.

After separating the bolt carrier from the upper receiver and then the bolt and bolt carrier from each other, I set out to try this out. The first thing that impressed me was the machining. The aft end of the bolt slid into the C.A.T. M-4 forked end, I called it the mouth, with a very close tolerance and allowed most of the fouling to be loosened up. The addition of a patch over the gap with some solvent allowed for all of the debris to be removed. After three patches it was spotless.

After I finished cleaning my bolt, I moved onto my bolt carrier and the C.A.T. M-4 was ready for more. The opposite end when fitted with a cleaning patch is able to clean out the bolt carrier and allows the bolt a nice clean hole to slide in and out of… and who doesn’t like that?

Since this tool is made of stainless steel when I was done cleaning the bolt and bolt carrier, I cleaned it and put it right into my range bag.

Couple all that with a money back guarantee that even if you break it they’ll will replace it, I don’t think that can beat it. So check out the Combat Application Tools M-4 tool, I do not think that you will be dissapointed.

Some of our resources include:
http://www.catm4.com