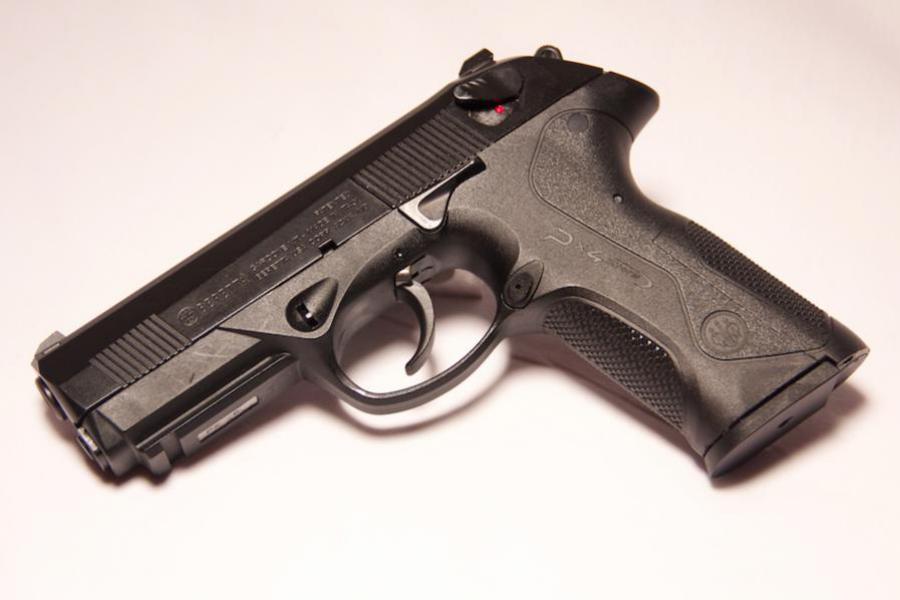 You just feel frigging cool. I don’t know why. You hold this gun and it’s semi-futuristic, it has in my opinion very nice lines and esthetics, and to top it all off it fits my hand like a glove. I have owned and fired many handguns but this one sounds so BAD ASS when you rack the slide, what gives? The Beretta PX-4 Storm was something I had to have. But is it love? or Lust? Let’s find out shall we?

The model tested was the Full-Size Type-F model chambered in 9mm. It comes with some pretty nice features that have begun to be pretty standard on many modern semi-autos. There is a interchangeable back strap, this model has an ambidextrous safety, there is also an ambidextrous interchangeable magazine release. The safety also doubles as a de-cocker and rolls the striker out of alignment with the firing pin. The finish is really nice and all edges are (sort-of) blended. Beretta uses a standard 3-dot sight system with a luminous glow in the dark coating. Gratuitous brochure facts out of the way, let’s get to the dirty bits.

I loved holding that Beretta. It has a very high grip that gets your hand nice and high and in line with a solid shooting grip. A couple of the guys didn’t like the stippling which is abundant on the front and back strap of the PX-4. It actually grips so high, that if you go to shoot a 1911 immediately after, you have some awkwardness engaging the grip safety. It isn’t really an aggressive stipple so to speak so much as a larger stipple. If you have dainty hands then you may want to wear gloves, or man the hell up (no offense ladies).

Being a n00b, this was the first time I had ever seen a Rotating barrel. The thought behind this is that it rotates the blowback energy outward radially and has less front to back recoil. Now since the model I tested is a 9mm, it is kind of difficult for me to validate this claim. In the future I hope to test a .40 S&W or .45 ACP caliber model where I am more used to the recoil. I had no issues with it and it seemed to assist in making a really slick sound when racked.

The trigger has a long, light pull with a clean, not crisp break. The reset however is quite solid with a positive and firm CLICK when re-engaging. When the safety is on, it swings almost freely with nothing but one small spring providing return. It almost feels like an old waterpistol in safe, slightly spongy with a beginning and an end and not a single catch in between. When the safety is off, it operates in both DA and SA with a good feel of the hammer pulling back short and smooth.

The field strip is similar to a Glock with a pull down notch on either side of the frame forward of the trigger guard. Unlike the glock however, there is no awkward “grip” that has to be done to disengage the slide from the frame rails. Simultaneously pull down, the slide will pop forward a couple millimeters and you are free to remove. Pretty easy actually and with smaller disasemble contact points, doesn’t seem to have any hang-ups of the original 92FS which has since long been corrected. Like the scene in LethalWeapon (which sequel escapes me either 3 or 4) where Jet Li grabs the muzzle of Mel Gibson’s Beretta and strips it with one move. Not happening on the PX-4.

She shoots straight, has good recoil mitigation with all the stippling, is ergonomically wonderful to hold. Magazines are solid, go in and out with ease, hell I even reloaded faster on this gun than most guns I own. Now for my personal pet peeves. I love the visible and ambidextrous safety, yet hate getting bit by the “Bat-wings” on a Slingshot style reload. Using certain ammo over others can produce an occasional stove-pipe which in my experience is uncommon on an entry level 9mm to be finicky with ammo.

Overall, if you wanted something newer, lighter and more ergonomic than the 92FS from Beretta (as classic as a 1911 at this point) this is an option. At the price point of $550, I don’t see the Storm making a run at the Glock die hards, but is a nice pistol nonetheless as we have come to expect from a fine manufacturer like Beretta. If you happen to see this gun at a good price, even used, I wouldn’t hesitate. It is a good shooter with a quality pedigree behind it. Personally, i give it a 3.75 out of 5.