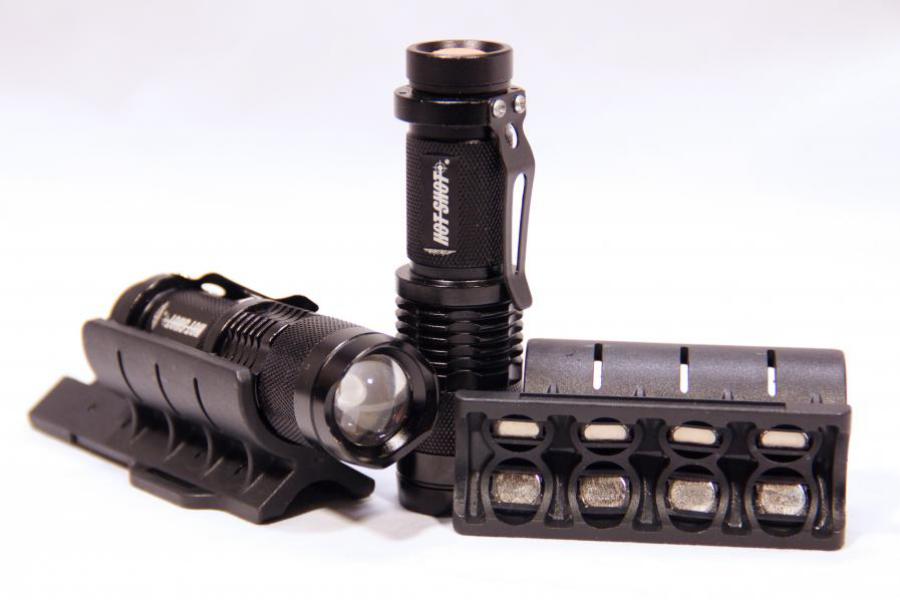 HotShotTactical sent us two BeamLOKR units, the HSAR15 and the HSSG12. One is the BeamLOKR mount for a standard AR-15 barrel but will also work on most barrels as well from .22’s to 30-30’s I am sure. The other is for 12g shotguns.

The first thing I did was was slap the HSSG12 on the magazine tube of a Mossberg 500 and gravity made it slide. I was immediately skeptical. After talking to Rick over at HotShotTactical (a really nice guy by the way) he reminded me of how much of an ass I was by even trying the thinner metal and advised I try the actual barrel. Sure enough, this thing stuck with a lot more authority on the heavy steel and renewed my confidence.

The BeamLOKR is an ABS frame with several magnets embedded in the portion that faces the barrel. The other side has a semi-rigid open curve that allows you to snap in most 1” diameter tac lights including the mini CREE LED lights they also sell. The BeamLOKR itself actually comes with a mini too. Those mini’s in conjunction with the BeamLOKR are actually pretty handy despite their main purpose. I can keep one clipped to the safe and if I need it, it instantly comes off the safe, onto the shotgun and i’m good to go. I have also had it magnetically waiting on a lamp post, refrigerator, vice and more for quick grab and go.

What separates the AR model from the shotgun model is the longer base and the availability of using a “Brush Strap.” This base will actually slide underneath many rails more contact as well. What I didn’t go over in the video is the fact that while on a range the strap was unnecessary, there are a lot of necessary purposes for it. There are times that I can think of out on a quad, horseback, camping, hunting etc. where maybe the quick attach/detach feature isn’t necessary. Maybe you want to make sure that a drop, solid jolt, clipping your rifle on trees and shrubbery while moving doesn’t lose your light and mount to the darkness.

The shotgun model was pretty good. I definitely ran the shotgun pretty hard with the BeamLOKR on it and if I was in a personal defense scenario that required me to put down that much shot that fast, i’m in a lot of trouble. The only thing I noticed was under rapid firing with the pump, the forward racking motion would actually help “walk” the mount up the barrel. A minor problem, like I said, I ran it pretty hard. As long as the BeamLOKR is mounted to the barrel and not the feed tube there is no problem at all during “normal” shotgun operation.

Overall, I was actually pretty pleased with the BeamLOKR for what it does. For those that want a weapon mounted light on their long gun and either don’t want or don’t need mounts ranging from $30-$200 plus a light, this is a great solution. It is cost effective, it is lightweight, it has multiple uses and applications and works with even more lights than just the mini it comes with. The ability to rapidly switch from a search and assess capability over to a weapon mounted light in less than a second is a pretty great feature that takes minimal practice in accomplishing. Most mini CREE type lights are fairly inexpensive and the fact that it can hold and maintain my heavier lights as well is a huge plus. A bit of a different product for me to test but taking into account its uses, price point and how much I actually probably used it without realizing I was, definitely helped me really see the value in this product. [BeamLOKR]