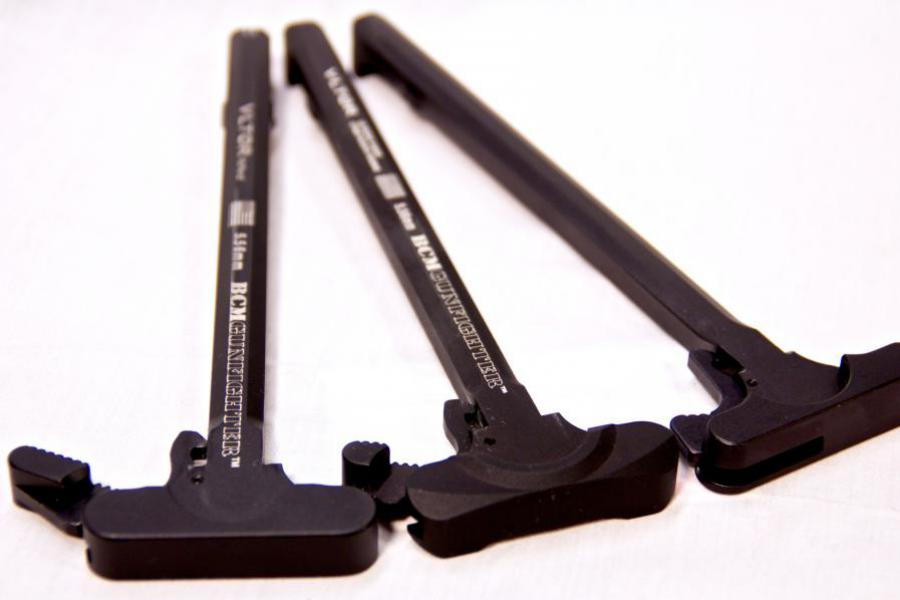 The Charging Handle. When most consider an AR purchase, many fun modifications and trinkets come to mind. What rail should I use? Choose an optic and/or BUIS, weigh out the furniture options. What about a flash hider or comp? But what about the charging handle?

Not exactly a wealth of variations out there that differ much from Mr. Stoner’s original design….

Well, that’s a lie. There are. There are a lot of options. However, many of them merely build upon the same or similar base and add some sort of personalized touch. From anodizing to laser engraving, latch modifications and ambidextrous systems. Some are simple and elegant, others downright grotesque and excessive, yet they all have someone who will buy them. Everyone has a want or a need whether it is for functionality, aesthetics, strength and durability or just for the sake of having an extra part.

Enter the BCM Gunfighter. This charging handle was designed by VLTOR for BCM to fulfill the needs of a constantly evolving tactics, training and manipulations by the guys on the front lines. Switching from the original method of removing the firing hand off the fire controls, using two fingers to disengage the latch and pull back to charge the weapon and releasing has since grown into a lot more high speed low drag method of support hand racking with one hand while keeping the trigger finger in the game on fire control (demonstrated in the video).

The only problem with all this is that although the methods have evolved, many options are still reliant on a single roll pin. Sometimes a latch swap out or mod adds a little more contact point and a larger surface to grab onto, in which case you then start getting some lateral slop left to right. All this does with modern methods is add flex and wear which isn’t good for functionality… or your wallet.

7075 T6 Billet is the basis for this recipe topped with some hard coat anodizing (you can get that from their website). But what does that mean? Let me make it very simple, the charging handle would be just as stiff if it was solid and not machined out. Hardness like that pays off in the end because over about 80% of the entire device is the handle itself. Next we have the roll pin. To be perfectly honest, I don’t know if it is any stronger or special, but what I do know is that it doesn’t matter with this model. Don’t get me wrong, it HAS to be there just like every other model. What separates the BCM from everyone else is actually the release on the charging handle.

The latch and release is where all the action is. The latch is beefy, with the same hardness and girth as the rest of the handle. No screwing around. But the highlight of the entire device to me, is to the rear of the latch. There is a series of “teeth” if you will, that sit behind an oversized beefy handle that when the latch is released and handle pulled to the rear make perfect contact with the solid back of the charging handle. No slot, no exposed spring, just a flat solid back. When those teeth make contact, they redirect all that force of a one handed rack into the centerline and across the entire back of the charging handle. This creates the same solid force (or pretty damn close to) as a traditional, hand off the fire control pull and you can do it faster, smoother and with just one hand.

So what? Whats the big deal? Is that all? No. Even if you are the kind of shooter that just likes to go have fun, none of this “one handed” business applies to you right? Wrong. Here is another reason why this is a great device for anyone. Malfunctions. In the video review we also show how handy this particular device is with both double feeds AND a seized bolt! Malfunctions and how to handle them safely and efficiently should be part of everyone’s repertoire and this is just one more tool that helps you get things fixed and get them fixed quick. You ever try and power eject a stuck round with a factory charging handle? Have fun with that.

Overall this is one tough part and I have both the Mod 3 (large) and the Mod 4 (medium) for my AR’s. I have yet to try any other options that make me even come close to not using the BCM. It is something, in my opinion, that is an overlooked part for most newer shooters. If you are building something from a stripped lower or just upgrading from something that has already failed you, don’t hesitate. The unsung hero that is the charging handle, the part that helps you chamber a round, press check, clear a double feed, assist ejecting a stuck round, clear a weapon… so many things that keep an AR up and running properly, are you sure you want to go cheap? [BCM]