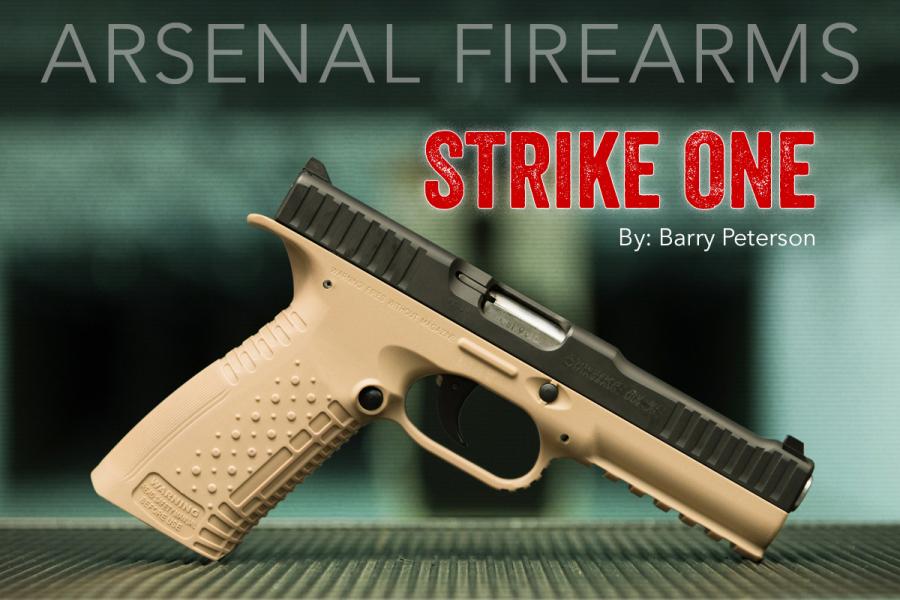 I hear Whitey had a pretty sweet AK here recently, but I wouldn’t know anything about that. And maybe someday I’ll convince Snake Hound Machine to hook me up with one of their sticks.

Anyway, you can imagine how a relatively new Russian-designed pistol would pique my interest. I’m referring, of course, to the Arsenal Strike One. The Strike One made its debut a few years ago, but hasn’t really been seen out in the world too much until fairly recently. Any number of factors may have played into that, including testing, manufacturing, distribution or whatever. But let’s cut to the chase: it got pretty darn tough to import guns from Russia in the past year or so. You may have heard about that on the news. CNN can fill you in, if you’d like.

No worries, though, because firearm manufacturers are nothing if not inventive. By sending unfinished pistols to Italy, the guns are now able to me stamped “Made in Italy” and imported to the U.S. with no additional headache. And as far as I’m concerned, that’s a good thing. Richard, one of the friendly folks over at my LGS picked up a Strike One recently and has been bugging me to try it out and write it up. So here goes.

Let’s get the basics out of the way right quick. The Strike One is somewhat unique in that it uses a non-tilting, Bergmann system barrel. I’m not an engineer, so don’t ask me how all that works. Suffice to say that unlike most other, Browning-style guns, the Strike One’s barrel doesn’t tilt upwards when fired. You can see in the pictures how perfectly straight the barrel stays throughout the firing process. I’ll talk about what that means for actually shooting in a minute. The gun has a 5 inch “cold hammered” barrel, lightweight polymer frame, and hardened steel slide. One interesting feature of note is the full-length steel frame rails inside the gun. That’s an interesting feature, but without doing serious stress tests, I’m not sure how much value it actually adds to the gun. The gun ships in with three 17-round magazines. To my knowledge there are no after-market mags available yet, but I’m sure ProMag will roll out a shoddy version in no time.
Oh, and it’s 9mm because 9mm is the one caliber to rule them all.

I headed over to the range recently, along with Chad the photo guy, to shoot the Strike One and see how I like it. I fed it a mix of ammo in different weights (115-147) and from a few different manufacturers. For some reason Richard asked that I not shoot steel cased ammo, even though I tried to explain that Russians are all about steel ammo and this gun should be built to eat it. That didn’t seem like a point worth arguing though, so we skipped the steel. Keeping in mind this isn’t a highly scientific accuracy or longevity test, we only shot about 150 rounds over the span of about an hour or so. Getting quality pictures sometimes means slowing everything down. We suffer for our art.

First off, some feels. The gun feels odd. When it’s unloaded, it has very little weight in the frame, and the upper assembly doesn’t add much. Even with that light weight, it feels solid and robust. I particularly like the scalloped front end of the slide, mostly for aesthetics. When loaded, the gun is about as perfectly balanced as and full-sized pistol on the market. The mag release is not truly ambidextrous, but can be switched from one side to the other (a la the M&P pistols). Strangely, there is no cut out or groove in the slide to work the slide stop/release. Instead, that is all done internally via a catch on the underside of the slide. It works. Mostly.

The Strike One shoots ridiculously smoothly. The locked barrel and low bore axis transfer felt recoil pretty much straight back into the shooters strong arm. Muzzle rise (or flip) is essentially nonexistent, somehow. I’ve been shooting a lot of pistols for a lot of years, and I can’t recall ever shooting one that feels quite like the Strike One. That being said, it feels weird; almost unnatural. It took me a couple mags worth of shooting to figure out how to compensate, but once I did it was smooth sailing. Less muzzle flip (or rise) means sights get back on target more quickly and follow-up shots are more accurate. Even shooting quick 5 round bursts yielded darn good accuracy results. I’ll also ad d that the trigger is among the best I’ve shot in recent memory. Light pre-travel, clean and crisp break, very good reset.

The gun shot all the ammo we put into it, with nary a problem to be had. Except for one light primer strike, but we can chalk that up to the ammo. I’ve had similar issues with that particular ammo in my other pistols.

However, the Strike One ain’t perfect. One many occasions, the slide did not lock back when the gun ran empty. That may be a magazine/follower issue, or it may have something to do with that unique slide stop design. Tough to say. After one string of fire, the slide locked back but then slammed forward when I dropped the magazine. That leads me to think the slide was only catching on the follower. Second issue was the fact that the Strike One’s controls (mag release, slide release) are pretty small. They sure look good, riding on that slim frame and all, but I had a heck of a time manipulating them with gloved hands. The mag release could stand to be enlarged a tad and the slide stop need a bit more purchase area. Those aren’t deal-breakers though, as any Glock owner will attest.

All in all, the Strike One is neat. Just that, neat. I don’t expect it will be dominating any markets any time soon. To my knowledge it hasn’t been adopted by any law enforcement or military units, though there were rumors of some Spetsnaz dude carrying them. Verifying Spetsnaz gear is tough for us non-Jack Ryan types though. It’s going to find a good niche with certain types of shooters who want “different” guns. It’s a quality shooter that might deserve more praise than it gets. But don’t go trading your Glock for it.

Many thanks again to Chad for the photos and to Richard and everyone at Sportsman’s Elite for the gun and range time.