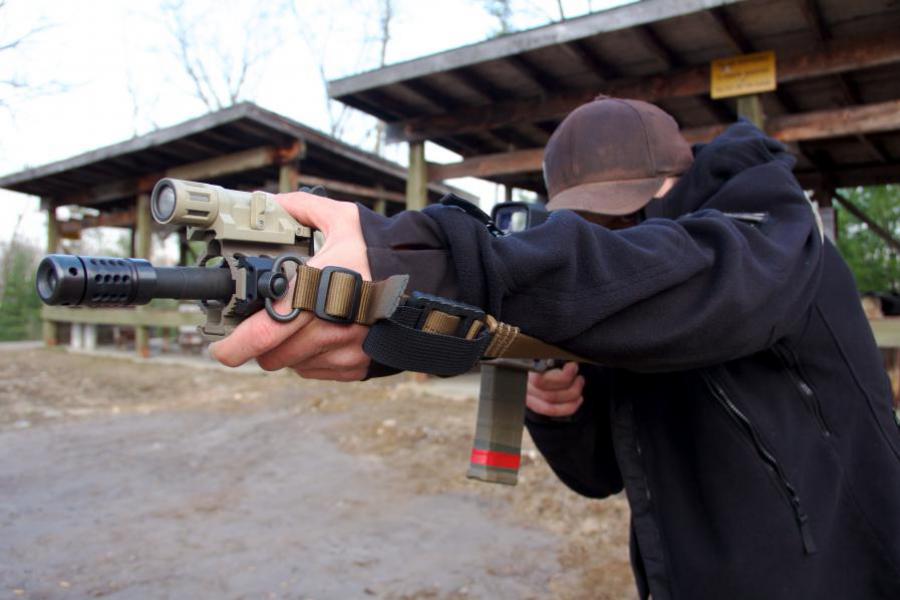 Ares Armor has been a huge favorite of ours for quite some time. From the Effin-A to their nylon gear and packs, we have yet to find something with their name on it we didn’t think was completely awesome.

Now I will be perfectly transparent in saying I am biased. We have had the honor of using a good amount of gear over the past couple years and there are only a couple items that have, through thick and thin, stayed on my gear. One of those things is the Ares Armor Huskey Amentum MK II, AKA the Huskey MKII EWS (Expeditionary Warfare Sling).

I have had the Huskey on one of my AR-15’s for roughly a year now and I still suck at transitions with it. (That’s because I don’t practice enough with it.) So transitions aside, I will tell you what I love about it and why I like it more than other slings I have tried. First things first, this thing is a beast. The nylon is far wider than any other sling I have tried from other manufacturers. This helps it stay sturdy and semi rigid while making it difficult for the sling to twist or bind up on you. This keeps it flat on you and your gear so there are no hiccups or snags in utilizing it.

Let’s talk slider, which in and of itself boggles my mind. There is a big difference between the MK I and the MK II but to the naked eye you just might miss it. Or possibly mistake it for something else and tighten the crap out of your sling keeping your rifle fully pinned against you. No joke, the first time I used it I thought that the sling was trying to kill me. Once I figured out how that buckle slider worked I was amazed. See, the slider coasts up and down the ultra wide nylon with only a slight bit of (if any) force. HOWEVER, that sucker stays locked in place at the length you slide it to without any wiggling or sliding on its own. I wish I had a belt that moved so easy and stayed so secure. But I digress, the difference between the MK I and the MK II is a cam lock allowing you to over tighten the sling very quickly. This is exceptionally useful as Ares demonstrated to us in the attached video for all hands free work.

Let it be known that I have not fast roped out of a helicopter, detained a suspect, repelled anywhere or done anything remotely as badass as all the things Ares designed this for. But I have used it and it works as advertised fantastically well. The over tighten cam is also easy to release by simply depressing the cam and returning your sling to normal length.

I was never a fan of the 2-point slings when I first started shooting and favored the single point sling. It was so cool and really “high-speed” I had to have it. As I have shot more, been to more trainings and had some really great tips and advice from people who actually know what they are doing and have done it, I am slowly migrating over to the 2-point. The stability of multiple points of contact between you and the rifle dramatically improves offhand accuracy as well as a secure way to stow the weapon as well. If I want to though, all I have to add is some QD adapters and a two to one Point Tri Glide and I can still have the best of both worlds.

When you understand the simplicity and strength of the Huskey, you can truly get so much more out this sling than any other sling on the market. Many come close, but the versatility of this sling combined with it’s build quality and strength… I haven’t found anything that matches up to it yet.